Just dip into the vast amount of material that has been written about the history of Christmas pudding and fairly soon you will come across references to King George I (reign 1714-1727). You will quickly learn that he was served plum pudding as part of his first Christmas dinner as newly crowned monarch in 1714. You will also find recipes that claim to be for the very pudding. Some sources even give us the exact time of the brand new king’s initial experience of this curious English dish – 6 pm on December 25th 1714.  As a result of these strong connections to the dish you will also learn that George was given the nickname the ‘Pudding King.’

However, the eighteenth century archival record is curiously silent on this matter. There does not seem to be anything on the story in any of the nineteenth century records either. It is not until the twentieth century that the story surfaces. And it surfaces with a clamour, with many leading food writers telling the story of the Pudding King, some claiming that it was George himself who was actually responsible for making it our national Christmas dish. So if there are no eighteenth century primary sources for the story, where on earth does it come from? Many food authors cite the recipe and the legends attached to it, including worthies like May Byron (1929) Florence White (1932), Dorothy Hartley (1954), and Elisabeth Ayrton (1974). However, all are unanimously silent on one important matter – none of them give their sources.

Plumcake, Food History Jottings research assistant has made a special project of this problem and has been delving through the historical evidence to find out how the story emerged. She has made some interesting discoveries and what follows is based on her research. The very earliest record she has found so far linking George I to plum pudding is an article about a royal family Christmas at Sandringham during the reign of George V (1910-1936), who came to the throne 196 years after the death of his namesake. This was published in the Strand Magazine in 1911. It is highly likely that this is the original source of our story - it is certainly the earliest so far discovered.

The article is entitled THE HOME LIFE OF THE ROYAL FAMILY. The author is unnamed, but is described in bold uppercase type by the Strand Magazine as  ‘AN OFFICIAL OF THE ROYAL HOUSEHOLD.’ It goes on to say that the article ‘IS PUBLISHED WITH GRACIOUS PERMISSION AND APPROVAL OF THEIR MAJESTIES THE KING AND QUEEN. THE ACCOMPANIED PHOTOGRAPHS OF THE ROYAL CHILDREN HAVE BEEN EXPRESSLY SELECTED FOR THE ARTICLE BY THE QUEEN HERSELF.’  It is definitely an article with impressive royal approbation.

This Christmas gathering was the first one for the royal family after George V’s coronation in June 1911. The article describes how after breakfast the royal children paid their compliments to the recently widowed Queen Mother and then the whole family attended morning service,

‘After service a return has been made in the past to Sandringham in order that the children may enjoy their Christmas dinner, which is composed of the traditional roast turkey, sausages and plum-pudding. The latter, by the way, is made from a recipe that has been in the possession of the Royal Family since the days of George I, and is compounded in the huge kitchens at Windsor Castle.’

The recipe is given in a footnote. Here it is –

We are glad to be able to give, by permission, this recipe, which is composed as  follows: 1½ lb. suet (finely shredded), 1lb. Demerara sugar, 1lb. small raisins, 1lb. plums  (stoned and cut in half), 4oz. citron (cut into thin slices), 4oz. candied peel (cut into thin  slices), teaspoonful of mixed spice, half a grated nutmeg, two teaspoonfuls of salt, 1lb.  bread crumbs, ½ lb. sifted flour, 1lb. of eggs (weighed in their shells), wineglass of brandy. Beat the eggs to a froth and then add to them half a pint of new milk and mix the  various ingredients. Let the mixture stand for twelve hours in a cool place. Then place in  moulds and boil for eight hours. The above would make three ordinary-sized puddings.  The Strand Magazine, Vol. 42, [1911] p.634 (No.252, December 1911).

What this article actually says is that this recipe had been in the possession of the Royal Family since the days of George I. What it does not say is that it is for making a pudding that was actually served to him. Anyone who has experience of early Georgian recipes will realise that this cannot be an exact transcription of the original. Its structure and language are entirely modern. If it is based on an eighteenth century original it is very much an adaption for an early twentieth century reader. We know of no other eighteenth century pudding recipes that instruct the cook to weigh the eggs. Nor is Demerera sugar an ingredient that is usually named in eighteenth century recipes.  It might be common ingredient now, but surprisingly candied peel is not an ingredient that occurred in eighteenth century plum puddings. The earliest recipe that Plumcake has found for one which includes it is in John Mollard, The Art of Cookery (London: 1801). Moulds for boiling puddings are described in nineteenth and early twentieth century recipes, but not in those from the early Georgian period.


The instruction to use ‘plums’ in the recipe is also interesting. Well it is a plum pudding is n’t it, so what is strange about that? However, when plums are called for in recipes for this dish, it usually means something else. After an initial definition of the word ‘plum’ as the fruit of the plum tree, Dr. Samuel Johnson in A Dictionary of the English Language (London: 1755), gives us an alternative meaning,

The Victorian economic historian Stephen Dowell in A History of Taxation and Taxes in England (London: 1884, IV. i. vii. 37) tells us more, ‘The dried grapes‥we term simply raisins when used for eating uncooked, and plums when they form an ingredient in the famous English plum pudding.’

But we are getting distracted into a different issue. Why plum pudding is called what it is and the additional meanings of the word ‘plum’ will be dealt with in greater detail in another posting. Let us return to the Pudding King. We do not doubt that there is a recipe in the Royal household somewhere for plum pudding that dates from the time of George I, but its wording would be completely different from the one published in the Strand Magazine. Compare the above to the language of this recipe from 1723, which incidentally, is also a recipe ‘from the days of George I’.

George I had four more years to reign when John Nott published the above recipe in 1723 in The Cook’s and Confectioner’s Dictionary. It is likely that the royal recipe published in the 1911 article was adapted to suit contemporary kitchen practice, or its language would have been closer to Nott’s instructions.

It is not until 1929 that we hear of George I’s Royal Christmas Plum Pudding again, this time in May Byron’s Puddings, Pastries and Sweet Dishes. Mrs Byron offers a slightly different version of the recipe, substituting the plums for Valencia raisins and the small raisins for sultanas. It is likely that she was trying to clarify the word plum for a readership that no longer understood its alternative meaning. She also doubles the quantity of flour, but it is pretty obvious that her source for the recipe is the 1911 article.

And so it goes on. In her lovely Good Things in England, Florence White, founder of the English Folk Cookery Association offers the same recipe, giving a version, which apart from a little more flour is pretty faithful to the 1911 original. The journalist Hayden Church cites the recipe in a rather interesting article written for the New York Times in December 1931 and syndicated two years later to The World Almanac and Book of Facts. But Church tells us that the pudding was made from ‘a recipe used in the royal household since the seventeenth century and preserved in an old cookery book at Windsor Castle.’  So we are now being told that the royal recipe predates the reign of George I. In her 1974 version, Elisabeth Ayrton includes self-raising flour, glacé cherries and dates, telling us more about 1970s taste than an authentic attempt to replicate an eighteenth century dish! Elisabeth! We thought that this was supposed to be the very pud that George ate in 1714 - shame on you!

Many other journalists and cookery authors right up to recent years have given versions of the recipe first described in the 1911 article, some of them elaborating on the story. We think that those who actually give us the exact time and date of George I’s first Christmas dinner were probably making a well educated guess! But whoever made up the story about him being called the Pudding King? He certainly was not called that in his lifetime, or even in the two centuries after his death. This particular variation on the theme seems to have emerged in the decades after World War II.

So it seems to us that the tales of the Pudding King are myths that have gradually grown on top of a recipe cited in a journalistic account of a Royal Christmas in 1911. However, to get to the real truth we need to see the royal cookery book with its recipe, hopefully still on a shelf somewhere in Windsor Castle. Is there anyone out there with some good royal connections who could organize that for us?  If there is just the slightest chance that Your Majesty reads this blog, could Plumcake and I come to Windsor to look through your cookery books please?

To demonstrate how the recipes claiming to be for George I’s Plum Pudding are derived from the 1911 Strand Magazine article, Plumcake has constructed this detailed analytical chart - click on the link below.


There is an ironic coda to this story of kings and Christmas pudding. George V, whose first Sandringham Christmas is described in the 1911 Strand magazine, probably has more legitimate claims to the title ‘Pudding King’ than his Hanoverian ancestor George I, whose links to the dish seem to be tenuous. On Christmas Day 1927 George V gave his whole-hearted support to a propaganda campaign organized by the Empire Marketing Board to encourage trade within the British Empire. He sat down that year at Sandringham with his family and instead of eating the usual pudding ‘from the days of George I’, he sampled the delights of Empire Christmas Pudding, supposedly invented by his chef André Cédard. This pudding was made with ingredients grown all over the British Empire. That Christmas the king’s loyal subjects throughout the Empire were encouraged to follow suite. Perhaps they should have toasted their monarch with,
‘The Pudding King is dead. Long live the Pudding King!’ 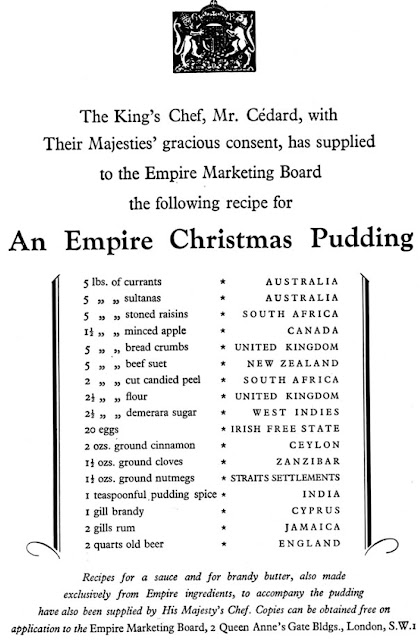