Last week, I was preparing for my Victorian Cookery course. Because of the impending celebrations for the diamond jubilee of Elizabeth II, I thought it would be fun to include a Victorian jubilee dish in the proceedings. My initial inclination was to make a dish called Jubilee Quenelles, a recipe for which appears in Agnes. B. Marshall's Larger Cookery Book of Extra Recipes (nd.1890s). These delicate morsels were shaped in oval quenelle moulds from a veal or chicken farce filled with cucumber peas, diced truffle and mushroom. They were then coated with veloute sauce and garnished with smaller quenelles moulded in the form of crowns partly coloured with carmine and little shapes cut out of truffle. In other words, poached veal quenelles piggybacked by smaller crown shaped quenelles, a time consuming dish, which would have involved half a day spent cutting out fiddly shapes from truffle.

So I decided to have a go at an easier dish - jubilee tea cakes from Mrs Marshall's earlier Cookery Book (London: 1885). The occurrence of a recipe for a jubilee cake in a book published two years before the 1887 celebration made me think that perhaps this cake was innovated twenty five years earlier for the Silver Jubilee of Victoria. But as I have mentioned in a previous posting, many English brewers were already making ales in 1885 which were intended to be laid down for two years in order to mature for drinking as special jubilee ales in 1887. People at the time did plan ahead for the big event. So perhaps Marshall included a recipe for these rather nice tea cakes because she knew that the event was not far off. Or more likely, as Plumcake has just pointed out to me, these tea cakes have nothing to do with royal jubilee celebrations, as the word 'jubilee' can encompass other meanings. Whatever their origins, jubilee tea cakes are very nice. Here is Mrs Marshall's  recipe.

So I fired up my range and set about making them. A requirement of the recipe is a set of small fleur rings. These were like crumpet rings, though unlike crumpet rings, they were sometimes fluted. Fortunately I have some surviving ones and filled them with the almond batter and put them in the oven. As they were baking, I went to my office and checked my email. I was surprised to find that my friend Annie Gray had at that moment posted a comment on my posting Jubilee Cakes about Mrs Marshall's recipe, which she had just discovered. What a coincidence.! 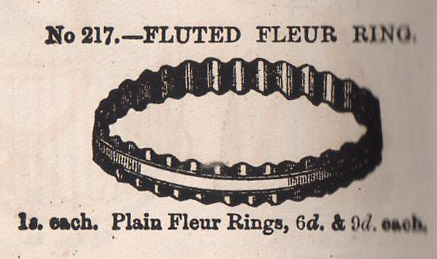 The tea cakes rose nicely in the oven, but then collapsed into little golden brown fluted cakes that looked a little like very light drop scones. I glazed them with the tea glace, rolled the sides while the icing was still wet in desiccated coconut and sprinkled them with chopped pistachio nuts. Verdict - lovely. Mrs Marshall suggests serving them with a compote of fruit or an ice. Since my students on the day made an Iced Cabinet Pudding, a strawberry ice cream and a compote of strawberries, we served these altogether for our evening meal with the Jubilee tea cakes as shown in the photo at the beginning of this post. 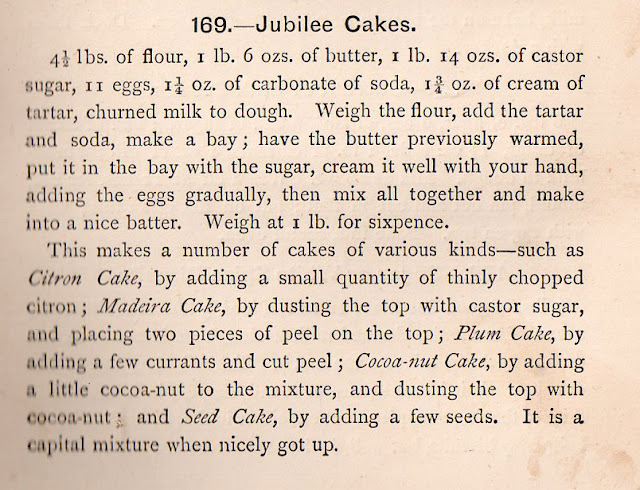 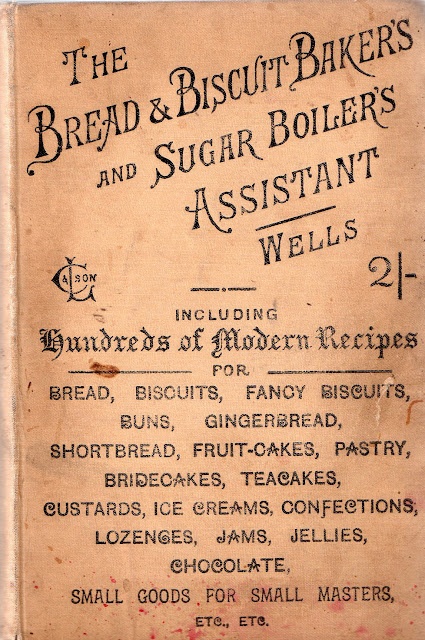 As well as Jubilee Cakes and other commemorative dishes, there were of course Jubilee Puddings. Plumcake has been researching primary sources for these and has discovered a nice horde, quite a few of them published in the US, where interest in British royals seems to have been strong at the end of the nineteenth century. Here then is Plumcake's collection of Jubilee Pudding recipes.

Jubilee Pudding. — Take half a pound of sponge cake, rather stale than otherwise, and cut it into thin slices. Butter one side, and spread the other either with orange marmalade or apricot jam, then place the slices in layers in a plain round mould, buttered side downwards. Pour three-quarters of a pint of good custard over each layer, and repeat until the mould is full. Let the pudding soak for an hour, then bake in a quick oven, and turn out before serving. Wine or brandy sauce may be sent to table with it. Time, an hour and a quarter to bake. Probable cost, 1s. 6d. Sufficient for four or five persons.

JUBILEE PUDDING. — Beat eight ounces of fresh butter to a cream, and mix with it eight ounces of finely sifted sugar, the same weight of fine flour, dried and sifted; two ounces of candied peel, sliced thin; six ounces of picked currants, and a few drops of essence of almonds, vanilla or lemon. When these ingredients are nicely mixed, moisten them with six fresh eggs, well beaten. Beat the mixture for a few minutes, then pour it into a buttered pudding basin or mould, cover the top with a sheet of buttered paper, and tie a pudding cloth over all. Plunge the pudding into plenty of fast boiling water, and let it boil hard for three hours, or if preferred, it may be steamed, in which case it will require half an hour longer. Turn the pudding out carefully on to a hot dish, pour wine sauce round about, and serve.
AUNT CHLOE. London, Eng.

Take six nice-shaped apples all about the same size; remove the cores and put a piece of cinnamon in each. Place the apples in a flat-bottomed basin; pour a teaspoonful of brandy over each. Cover the top of the basin with a sheet of paper and set it in a pan of boiling water to steam. When soft remove the cinnamon and put a teaspoonful of strawberry jam in its place. Then dish them up in a pyramid and pour over them all half a pint of whipped cream flavoured with a few drops of vanilla and sweetened with sugar. Sprinkle ratafia cake crumbs over all.


JUBILEE PUDDING — (1) A border-mould of claret jelly, center filled with whipped cream mixed with cut candied fruits and preserved ginger. (2) A hot vermicelli - pudding made like a bread-custard and baked; strawberry jam and cream spread on top, and meringue over — like queen pudding.

The Steward's Handbook and Guide to Party Catering, Jessup Whitehead,


Cold Puddings and Frozen Puddings. — Some of these "puddings" might just as appropriately be called creams; however, fashion ordains that they shall be puddings. One of the newest is the

Take two ounces of grated bread-crumbs, two ounces butter, the same of castor sugar, two well-beaten eggs, and two large tablespoonfuls of preserve. Mix thoroughly, put in a mould and steam for an hour and a half, and serve with wine sauce.


Jubilee Pudding. — Half a pint of cream, ½oz. of gelatine, 2oz. of caster sugar, and 1oz. each of preserved ginger, apricots, cherries, and angelica, with a tablespoonful of ginger syrup. Whip the cream till perfectly stiff, with a tiny dust of salt, then mix in lightly the fruit, sugar, syrup, and lastly the gelatine previously dissolved in a little water to avoid lumps. Mould in the usual way, turn out, and serve.

Take 3 table-spoonfuls flour, 1 table-spoonful corn-starch, a pinch of salt. Mix together with a little cold milk. Boil 1 pt. of milk, stir in the mixture, take from the fire. When it gets cool add 4 eggs, yolks and whites beaten separately. Beat in the yolks, stir in the whites, pour all into a pudding dish and set in a pan of cold water. Steam ½ hour in the in the oven. Serve with liquid sauce.