Those of you who follow this blog are probably aware that I love food that looks good. And the kind of good looks that I love are those that express the extraordinary skill and attention to detail that cooks in the past lavished on their art. Their sense of food aesthetics was very different to ours. I am sure they would have been completely puzzled by the abstract smears, dustings, drizzles, foams and stacks of contemporary plated-up restaurant food. I hope this blog is a healthy antidote to such matters.

But I also love food that tastes good and am always on the look out for special recipes that would be suitable to serve to guests who attend my various period cookery courses. Many of those who have come have waxed lyrical about some apricot dishes that I serve when I can get hold of decent fruit. I thought I would share those recipes with you.

The first one is a lovely apricot tart which is in Charles Elmé Francatelli's book The Cook's Guide (London: 1855). Francatelli was born in Clarkenwell, the Italian district of London to Italian parents who worked as domestic servants. In the early 1840s he served briefly as Queen Victoria's chef de cuisine at Buckingham Palace, but was not happy with the sanitary arrangements in the palace kitchen and left! I like to think that this recipe, seemingly of German origin, might have been a court favourite in the Duchy of Saxe-Coberg-Gotha. We will never know, but perhaps Francatelli prepared it for Prince Albert. Here is the recipe, but beware I do not go in for contemporary redactions. If you really want to learn about food in the past, just do as you are told. The old recipes that follow are perfectly clear. 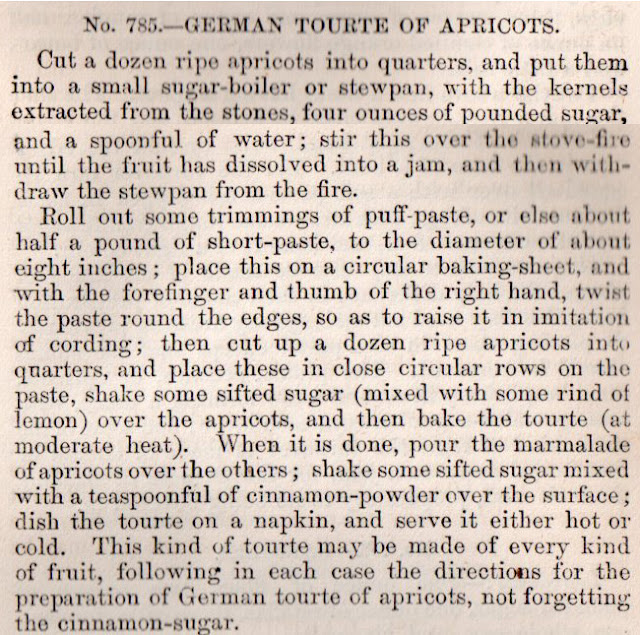 My next two recipes are from a hundred years earlier. They are both from a lovely little cookery book first published in Pontefract in Yorkshire by Mrs Elizabeth Moxon in 1741. Her English Housewifery Exemplified is a real antidote to the complex recipes of the male cooks of this period. And quite rightly it went on to become one of the best selling books of the eighteenth century. It contains a number of regional Yorkshire recipes, including some very old fashioned gingerbreads. The two recipes I have chosen are sweet ones, the first, 'Apricock Jumballs' is a very artistic and delightful item of confectionery, while the second is a wonderful cream pudding. 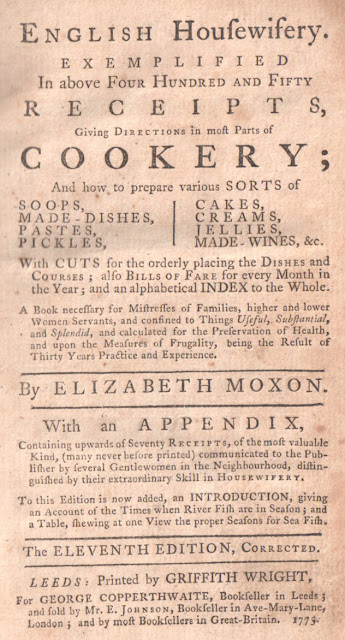 In The New World of English Words (London: 1678) Edward Phillips defines the name for this confection thus, 'Jumbals, a sort of Sugared past, wreathed into knots'. These knotted delicacies were usually made with a kind of biscuit or marchpane dough and were baked. They probably emerged from the craze in the 1570s for knotted strap work. Jumbals were made all over Europe. In France they were called gimblette, in Italy gemelli. They almost certainly derive their name from the Italian verb gemáre - 'to divide asunder'.* These confections were responsible for the term 'to jumble up'. Jumbals were made by professional early modern period confectioners to a very high level of complexity and are frequently depicted in Netherlandish paintings.

The more basic apricot jumbles below were made on my Sugarwork and Confectionery Course and are in the form of true lovers knots. Similar jumbals or knots were made with pippin (apple paste). They have a really concentrated flavour of fruit.

The last dish is a lovely cream custard covered with confited apricots. I have given you a whole double page spread, as you need to refer to both Moxon's instructions to make Apricock Custard and her Apricock Pudding in order to make sense of the recipe. Note her recipe 'To make Jumballs another way', which is a baked biscuit version, but like a lot of later jumbles, not jumbled up at all, but like a flat biscuit. 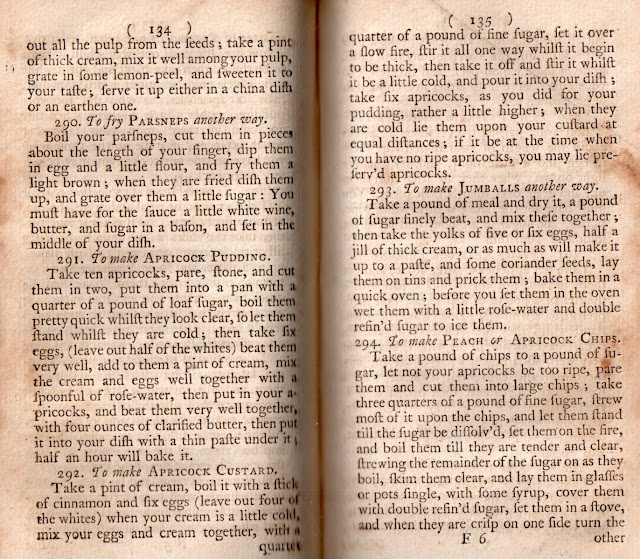 I make the custard as Mrs Moxon instructs, but frequently bake it in a dish in a bain marie in a cool oven until it just sets. I then put the cooked apricots on top. The combination of the rich cream and the half candied apricots is superb. Do try it.