I recently had an email enquiry from the Australian historian Rachel Grimmer concerning the use of jelly moulds in sixteenth century England at the time of Henry VIII. Of all English monarchs Henry is probably the first to come to mind when thinking of feasting and gastronomic excess, though bills of fare for specific meals at his court are rare. Neither Peter Brears in his excellent book on the food culture of Hampton Court All the Kings Cooks, nor Alison Simm in Food and Feast in Tudor England give any examples of Henrician menus. Nevertheless, a few 'ordinances of fares of the dietts to be served to the King's Highnesse' transcribed from a manuscript of 1526 were published in 1790 in one of my favourite sources on British royal domestic matters, the wonderful A Collection of Ordinances and Regulations for the Government of the Royal Household printed for the Society of Antiquaries. And jelly appears on the menu. In fact a jelly made with the spiced wine hippocras is featured at the beginning of the second course of a royal diet 'on a flesh day' served alongside cream of almonds. (Though some doubt has been raised about this because of the comma separating the words Jelly and Ipocras - please read Tudor Cook's very pertinent comment below). 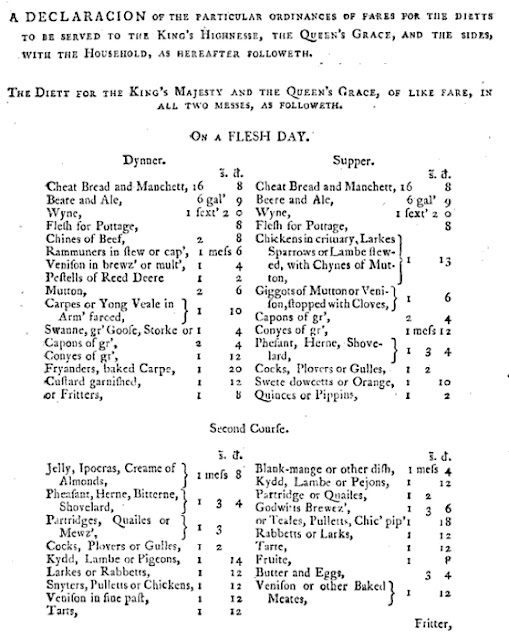 Jely ypocras seems to have been a royal favourite. It also occurs in an earlier bill of fare for a Henrician feast transcribed from a since lost manuscript in 1672 by the antiquarian Elias Ashmole in his magisterial History of the Noble Order of the Garter. Unlike the 'dietts' of 1526 this earlier meal was for a specific occasion and a very grand one too. In the second course of the dinner held as part of the Garter celebrations at St George's Hall, Windsor Castle on Sunday 29th May in 1520, 'jely ypocras' was again served to Henry XVIII and Queen Catherine of Aragon. As in the 1526 diet it is listed as the first dish in the second course. 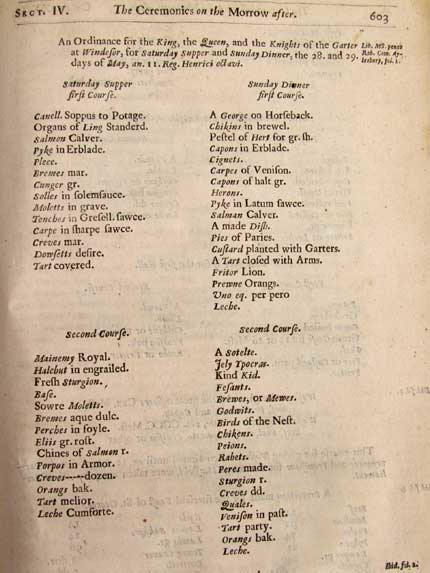 How this jelly was presented to table is not indicated. Was it moulded, or served in glass or silver vessels? I don't suppose we will ever know. I have seen a number of carved wooden moulds (all continental) which date from the sixteenth century, but they are all carved in shallow relief and were probably used for printing marchpane paste and cotoniacs. But sophisticated methods of moulding jellies did exist at the Tudor court. A letter dated July 10th 1517, sent to Isabella d'Este, Marchesa of Mantua by Francesco Chieregato, the apostolic nuncio in England, describes a remarkable feast which Henry gave in honour of an embassy sent by the King of Spain. This extraordinary supper, which followed a magnificent pageant and joust, puts the 1520 garter feast and the rather domestic 1526 'dietts' firmly in the shade. Chieregato's comments at the end of his letter on the elegant manners at the English court belie the popular but mistaken image of Tudor dining as a boorish free-for-all. But note the fourth paragraph on the twenty different jellies served at the feast,

' All the knights and jousters then assembled together, and having made a fine procession around the tiltyard, accompanied the King to the palace, where his Majesty had caused a sumptuous supper to be prepared. There were present the King, the two Queens, the Cardinal, all the aforesaid ambassadors, the Duke of Norfolk, the Marquis (of Dorset), and their ladies, together with other baronesses, in such numbers, that at table each man paired with a lady.

There was a buffet set out, 30 feet in length, and 20 feet high, with silver gilt vases, and vases of gold, worth vast treasure, none of which were touched. All the small platters used for the table-service, namely “seyphi,” dishes, basins, plates, saltcellars, and goblets were all of pure gold. The large vases were all of silver gilt, very costly and precious.


The guests remained at table for seven hours by the clock. All the viands placed before the King were borne by an elephant, or by lions, or panthers, or other animals, marvellously designed; and fresh representations were made constantly with music and instruments of divers sorts. The removal and replacing of dishes the whole time was incessant, the hall in every direction being full of fresh viands on their way to table. Every imaginable sort of meat known in the kingdom was served, and fish in like manner, even down to prawn pasties (fino alli gambari de pastelli); but the jellies (zeladie), of some 20 sorts perhaps, surpassed everything; they were made in the shape of castles and of animals of various descriptions, as beautiful and as admirable as can be imagined.

In short, the wealth and civilization of the world are here; and those who call the English barbarians appear to me to render themselves such. I here perceive very elegant manners, extreme decorum, and very great politeness; and amongst other things there is this most invincible King, whose acquirements and qualities are so many and excellent that I consider him to excel all who ever wore a crown; and blessed and happy may this country call itself in having as its lord so worthy and eminent a sovereign, whose sway is more bland and gentle than the greatest liberty under any other. After supper his Majesty and the chief ambassador from the Catholic King, together with other lords, danced with the ladies until daybreak.'*

The great Isabella d'Este, the recipient of Chieregato's letter had a real interest in this occasion, as her husband Francesco Gonzaga had gifted a magnificent horse to King Henry which was ridden at the joust. Feasting was an important element of life in the Gonzaga family and Isabella was well used to lavish banquets. Bartolommeo Sacchi (1412-1478), better known as Platina, author of the first printed cookery book had worked for Francesco's grandfather Ludovico II Gonzaga as tutor to his children. It is interesting to see how Cheiregato is trying to impress the marchesa with the scale of Henry's feast and to perhaps correct any stereotypical ideas she may have had about English food.

There were earlier examples of moulded jellies at the coronation feast of the eight year old Henry VI at Westminster Hall in 1429, including one in the form of a 'Gely party wryten and noted with Te Deum laudamus'. So the technology of making elaborate dishes of this kind had been around for at least a century before Henry's jellies in the form of castles and animals were borne to his table on the backs of elephants, panthers and lions.

Although there are recipes for plain hippocras in early sixteenth century cookery texts, a specific recipe for a jelly made with hippocras does not appear until the reign of Elizabeth I. It was published in A. W., A Book of Cookrye, Very Necessary For All Such As Delight Therin. (London: 1584) and is simply called jelly. 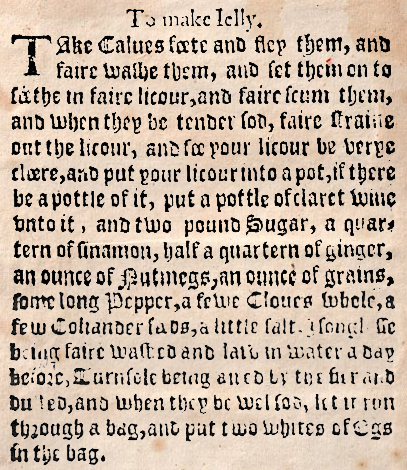 In case you find the black letter of the original difficult to read, here is a modern transcription.

Take Calves feete and fley them, and faire washe them, and set them on to seethe in faire licour, and faire scum them, and when they be tender sod, faire straine out the licour, and see your licour be verye cleere, and put your licour into a pot, if there be a pottle of it, put a pottle of claret wine unto it, and two pound Sugar, a quartern of sinamon, half a quartern of ginger, an ounce of Nutmegs, an ounce of grains, some long Pepper, a fewe Cloves whole, a few Coliander sads, a little salt, Isonglasse being faire washed and laid in water a day before, Turnsole being aired be the fier and dusted, and when they be wel sod, let it run through a bag, and put two whites of Egs in the bag.

One of the ingredients of A.W.'s recipe is turnsole, a dyestuff commonly used to colour jellies and other foods. It was chiefly made from the fruits of Chrozophora tinctoria, a type of spurge found in the Mediterranean. It appeared in commerce as a rag which you macerated in your jelly mixture in order to release its colour. Henry Lyte in his A niewe Herball or Historie of Plantes (London:1578) tells us that ‘they die and stayne old linnen cloutes and ragges into a purple colour wherewithall in this countrey, men use to colour gellies, wynes, fyne confeciones and comfittes.' More on turnsole and its applications in the kitchen in another post. 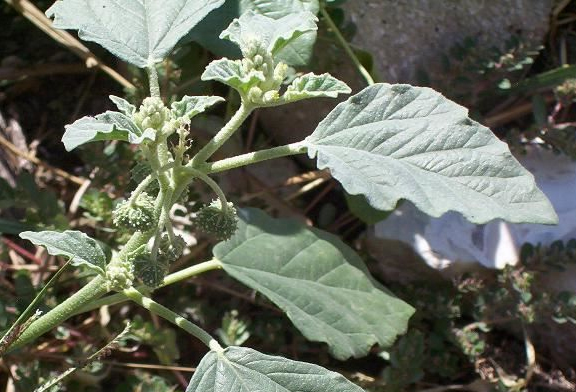 Chrozophora tinctoria or turnsole. Be careful with this plant. Like other members of the Euphorbiaceae, it contains toxic glucosides. Put it in your jely ypocras at your peril.

There is much more on Hippocras on my website.