Macedoine and Other Eccentric Jellies

Perhaps the most singular culinary expression of the advance of the Industrial Revolution in Victorian Britain was the extraordinary popularity of mass-produced copper jelly moulds. By the middle of the nineteenth century the fashion for this kind of kitchen kit had accelerated into a gastronomic craze. This was the result of the convergence of two emerging phenomena - the availability of cheap factory made gelatine and the increasing use of powerful pneumatic presses to stamp out copper into ever more intricate shapes. After a hundred years of being an unloved, even despised children's party food, a jelly revival has once again recently hit the fashionable food sector. This was started about twenty years ago by my dear genius friend Peter Brears and to a lesser extent by myself, when both of us started running country house events where we recreated jellies and other moulded foods for the public using original period moulds. I also started running courses on the subject in the early 1990s. More recently, Sam Bompas and Harry Parr, both attendees of my courses who have always kindly acknowledged the debt they owe to Peter and myself, have made a career for themselves out of the genre. However, despite modern computer 3D printing technology, the moulds available to the contemporary aspiring jelly maker just cannot compete with those of the Victorian kitchen. Just look at these!

A few nineteenth manufacturers designed and produced highly specialised multi-part moulds for creating very unusual jellies with mysterious internal components, such as spiral columns and pyramids of fruit. Some of these striking British designs were even admired from afar by important chefs on the other side of the English Channel. In Cosmopolitan Cookery (London: 1870), the great Second Empire French chef Felix Urbain Dubois illustrated two of these extraordinary English inventions together with recipes he designed for them. He probably encountered them in London when he was exiled there during the Franco-Prussian War. One he illustrated was the macedoine mould, a fancy copper mould with a dome shaped internal liner, both clipped together with three metal pins. Here is Dubois's illustration -

This mould was utilised by pouring a transparent jelly into the gap between the mould and the liner. Once the jelly had set, warm water was poured into the liner, which enabled it to be removed. Small pieces of fruit (the 'macedoine') and more jelly could then be used to fill up the resulting cavity. The finished dish was a striking hollow jelly containing a mosaic of coloured fruit, which distorted into an abstract pattern because of the effects of refraction caused by the flutings on the mould. I am fortunate enough to own a complete macedoine mould and used it to make the jelly at the top of this posting. However, my example is a different design from that which Dubois illustrates, though in principle it functions in exactly the same way. Although macedoine moulds are extremely rare - I have only ever seen two others, which lacked their liners. My example is the only one I have ever encountered which is complete. Here are some photographs. 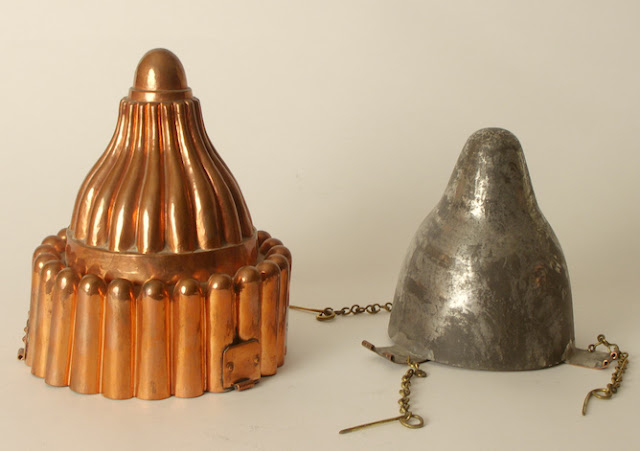 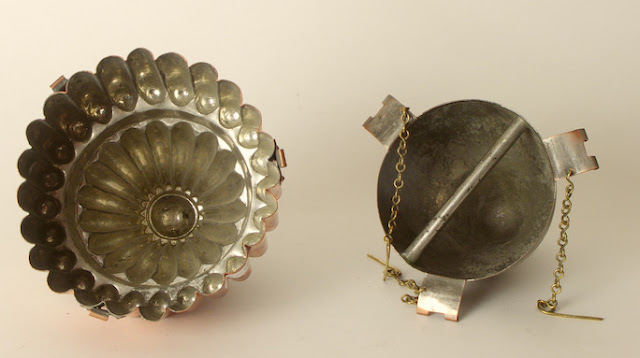 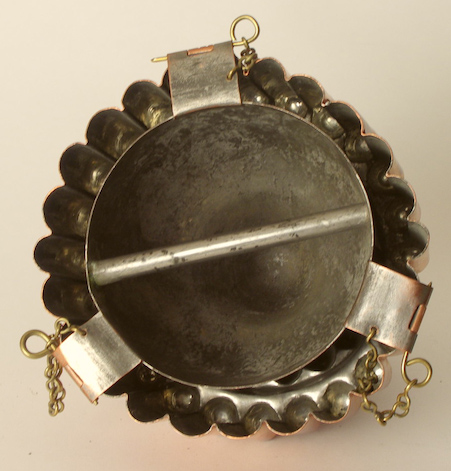 The chained pins ensure that the inner liner is kept stable and at an equal distance from the outer mould. 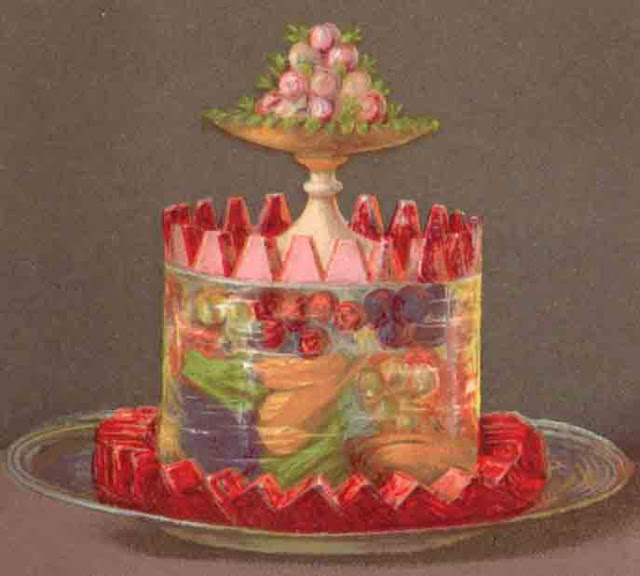 Macedoine jellies were also be made in plain moulds. The striking example above is from Jules Gouffé, The Royal Book of Pastry and Confectionery (London: 1874). A large plain charlotte mould would have been used to make this. It has been garnished with jelly croutons to create the crest around the top and is surmounted by a gum paste or nougat tazza filled with real or ice cream strawberries. Although a very weak jelly with a light 'mouth feel' was used to make a macedoine, the fruit inside acted as a very strong armature which could support a decorative structure like the tazza above. 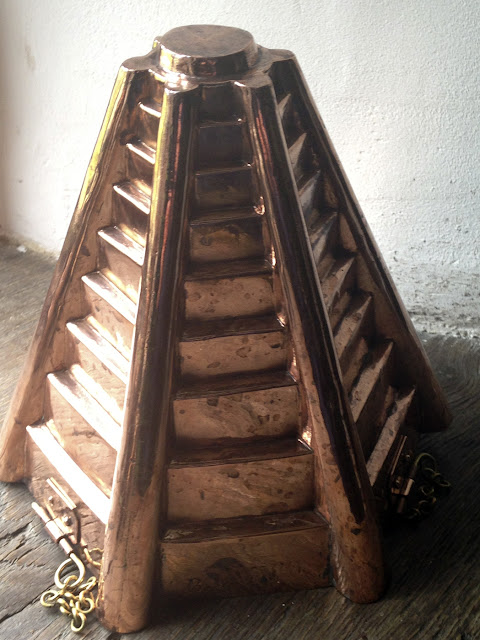 Even rarer than the macedoine mould illustrated by Dubois is this remarkable and lovely version, which reminds me of a Maya pyramid or ziggurat. It has a liner very similar to the other one and makes the most wonderful jelly filled with a pyramid of fruit. I have never ever seen another in this design. 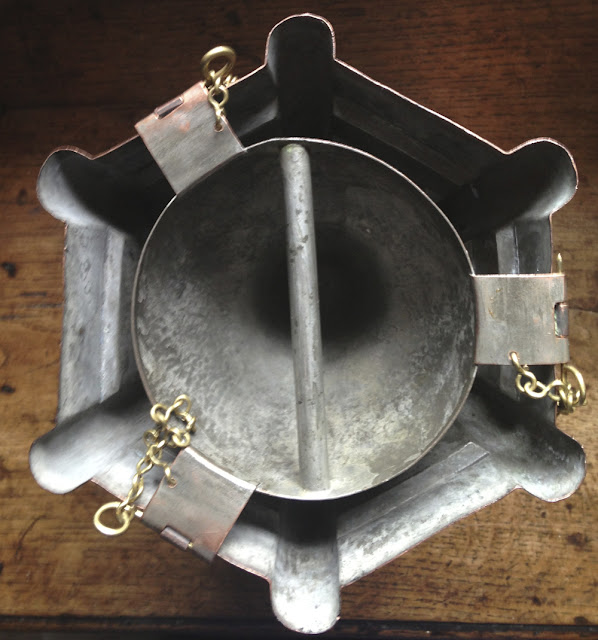 The second English mould illustrated by Dubois in Cosmopolitan Cookery (1870) is a version of a very popular novelty mould first marketed by Temple and Reynolds of Belgravia in 1850. The location of their shop gave the name to this particular dish, the most extraordinary of all Victorian novelty jellies, the Belgrave. The outer copper moulds are quite common, but a complete set with a full compliment of pewter spiral liners is a rare find. Two versions were made, the round and the oval, the latter being very scarce now, especially with liners. The liners were placed into a jelly mould which was filled with clear jelly. When the jelly had set, the liners were literally 'screwed' out of the jelly by pouring hot water into them. This resulted in a number of spiral cavities which could then be filled with a coloured jelly or blancmange.

The two most common jelly moulds which included liners to create striking internal features were the Alexandra Cross and Brunswick Star. These were designed to celebrate the wedding of Queen Victoria's eldest son Edward Prince of Wales to Princess Alexandra of Denmark. The Alexandra Cross jelly had the Danish Flag running all the way through it, while the Brunswick Star had a white Garter Star running through it, both rather like a stick of rock. Here is an advertisement from the 1890s published by the cookery teacher and mould retailer Mrs Agnes Marshall. Surviving liners are almost unknown. 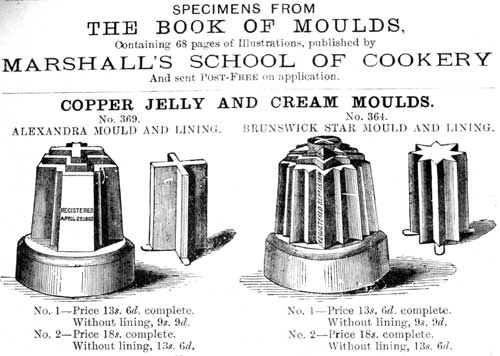 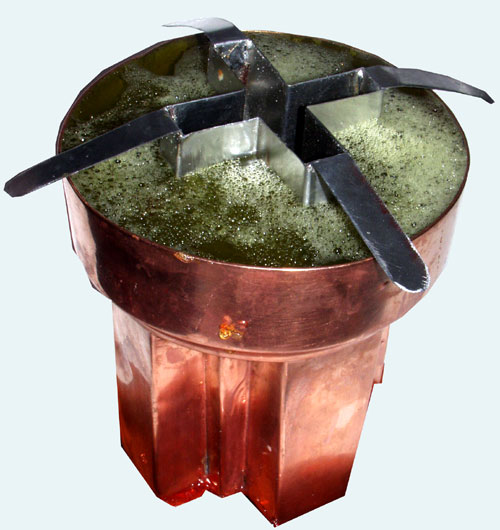 To make both, coloured jellies were poured into the mould in a particular order and then the liners were inserted. The rest of the jelly was poured in around the liner, which was removed by pouring hot water into it. The cavity was then filled with white blancmange.

About three years ago I manned the wonderful period kitchen at Harewood House and demonstrated period jelly making to the general public. As the jellies came from the moulds, I dressed the dining room with a typical Victorian entremet course using Princess Mary's priceless Venetian glass dessert service. Last week I was at Harewood again, this time dressing the kitchen and gallery (the most wonderful room in England) with Regency period food for a major forthcoming BBC drama production, which I will tell you more about after it has been transmitted at Christmas. I made a large number of jellies and blancmanges for this production using Staffordshire ceramic moulds made in the late eighteenth and early nineteenth century. To whet your appetite, here are a few photos. As you can see, the Victorians were not the only ones to have beautiful moulded foods - the late Georgians could give them (and Bompas and Parr) a real run for their money.

There is a little more on these remarkable jellies here