Miss Simmon's 'light cakes baked in cups' and Mrs Rundell's queen cakes in tea cups were not actually called cup cakes. So when did these cakes first get this name? Food History Jotting's researcher Plumcake has been investigating the American history of the cupcake and the earliest recipe she has found actually called by name 'cup cake', was published by Eliza Leslie in Seventy-five Receipts for Pastry, Cakes, and Sweetmeats (Phildelphia:1828). The reason why Miss Leslie calls this a cup cake is not because it is baked in a cup - it is actually baked in small tins - but because the ingredients are measured out in cups. Here is her original recipe. 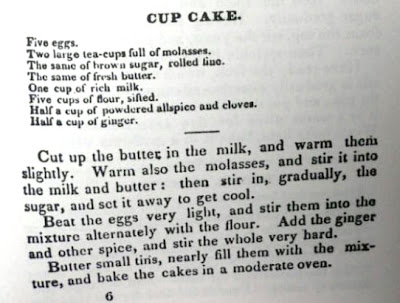 Miss Leslie's recipe is the only one in her book that uses the cup as a unit of measurement. All the others are written in pounds and ounces. This makes the recipe very significant in terms of American culinary history, because the volumetric unit of the cup eventually becomes standard in all US cookery texts, as it is today. Her 1828 recipe Cup Cake seems to have pioneered this approach. Miss Leslie's book is important in another way too, because it is probably the first cookery text published in the New World which lists the ingredients at the beginning of each recipe. This approach to recipe layout was first used in print by the Scottish confectioner and cook J. Caird in The Complete Confectioner (Edinburgh: 1809).


Related to this kind of cup cake, where the ingredients are measured out with 'a cup of that, two cups of this, three cups of that etc.', was the much older pound cake, two recipes for which were published by Miss Simmons in 1796. These give units in weight rather than volume -  a pound of this and a pound of that etc.,  thus the name. However, pound cakes first emerged in England, the earliest we know first appearing in Hannah Glasse, The Art of Cookery made Plain and Easy (London: 1747).


So the earliest cake to actually be called a cup cake was given this name, not because it was baked in a cup, but because its ingredients were measured out by the cup. This of course made the recipe easy to commit to memory. In fact by the early 1850s one variation on the theme became known as a 1-2-3-4 cake, because it was made from 1 cup of butter, 2 cups of sugar, 3 cups of flour and 4 eggs. What a perfect mnemonic!


Plumcake has discovered that the earliest printed recipe found so far for this kind of cake appeared in Lydia Maria Child's The American Frugal Housewife in the 29th edition published in 1844. However, it is not called a 1-2-3-4 cake, just plain cup cake. Mrs Child's book has a complex publishing history, the first edition being printed in Boston in 1829, under the title The Frugal Housewife, Dedicated to Those Who Are Not Ashamed of Economy. By the eighth edition of 1832, its title was changed to The American Frugal Housewife, so as not to confuse it with the book called The Frugal Housewife by the English author Susannah Carter. Neither I, nor Plumcake, have seen any of these earlier editions of Mrs Child's book, so if any readers of our blog have access to any of them, we would be interested to hear from you, especially if you find a recipe which predates 1844.


Mrs Child's recipe is in every way a cup cake. The ingredients are not only measured out in cups, but the individual cup cakes are also baked in cups. Here is her recipe.

1,2,3,4 CAKE.
One cup of butter; two cups of sugar; three cups of flour; four eggs; cup of milk; scant tea-spoon of saleratus; one nutmeg; a little cinnamon. Work the butter and sugar together; beat the eggs separately to a froth, and work the dough as well as pound cake. Add the soda and put the cake immediately to bake.

This sounds like one large cake rather than individual small cakes like Miss Child's cup cakes. Saleratus was an early name for sodium or potassium bicarbonate from Latin sal aeratus - aerating salt. It occurred naturally in the vicinity of Saleratus Lake in Wyoming and was first marketed in North America as a leavening agent in the 1840s. It was the Americans, or more correctly German Americans, who seem to have popularised soda as a raising agent in baking. Amelia Simmon's baking recipes frequently call for pearl-ash, a form of potassium carbonate made by further burning the potash produced from plants and wood.


In fact a cup cake recipe in an English cookery manuscript dated 1835 in the Food History Jottings collection includes pearl-ash as an ingredient. As far as we know, this is the earliest English recipe for a cup cake, but because of the inclusion of pearl-ash, we suspect it is of American origin. The recipe indicates that it was baked as one large single cake.

So the cup cake did eventually come to England and by the late nineteenth century cakes of this name were  being made commercially. In fact our friend Frederick Vine not only gives us a couple of professional recipes, but shows us the equipment used to bake them. Here is an illustration of a tray of tin cup cake pans. The individual cups were riveted to the metal tray. The cakes he advocated baking in these, were egg leavened fruit cakes with currants and mixed peel, quite different to any cup cake we have seen so far.

Now in trying to trace the development of our traditional foods, nothing is ever plain and simple. A contemporary of Vine, the great London chef Theodore Garrett. gives us a couple of recipes for cup cakes which are radically different to any of the others that Plumcake and I have studied so far. One describes a cake mixture raised with yeast which is then transferred into cups to be baked. The other one, which is much more unusual is reproduced below. Here the cup cake mixture is moulded in teacups, but not baked in them. 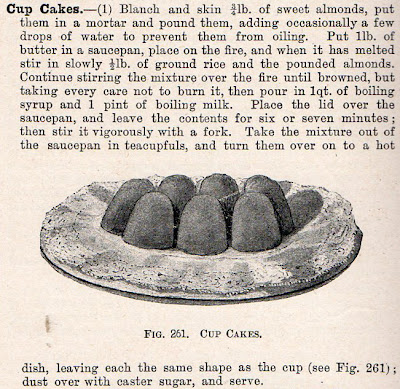 So cup cakes seem to have been many different things to many different people. We have also reached the end of the nineteenth century and we still have not seen anything like the modern cup cake which depends for its character on being baked in a paper cup. So we had better deal with the issue of paper cups in our next posting - Queen Cakes and Cup Cakes 3.