I have not posted an article on this blog for ages. A number of demanding TV and museum projects have conspired to make me so busy that I have had no time to add anything in the past couple of months. So with all this going on, I thought I would set aside an hour or two to share with you a recent and remarkable find.

I have frequently mentioned the Italian confectioner Willliam Jarrin on this blog. Resident in London in the first half of the nineteenth century, his book The Italian Confectioner (London: 1820) provides a remarkable insight into the extraordinary world of the European confectioner of this period. In my own practical endeavours in this field, I have learnt more from Jarrin's writings than from any other printed historical source. He came to London from Paris in 1817 to work as an ornament maker for the celebrated London confectioner James Gunter. Even by this time the young Italian was a consummate practitioner of sugar sculpture. In his book he boasts of an occasion when he produced a gum paste piece montée for an entertainment in Paris attended by Napoleon, which included a full length sculpture of the Emperor himself. Napoleon was apparently impressed with his work. Jarrin tells us that he preferred to freely model in gum paste, but he also pressed the material into wooden moulds to make all sorts of motifs for various purposes. Like many confectioners, he carved his own moulds, his preferred woods being pear and box. In a chapter entitled Engraving on Wood, he claims that anyone with enough patience could learn to carve moulds of this kind. In 1820, he tells us that he had been practising the art for 16 years, which would have made him 20 years old when he started.

Until a few days ago, I knew of only one surviving sugar paste mould actually carved by Jarrin, a small slab of pear wood engraved with the figure of a drunken man and two busts - one a man in a tricorn hat, the other a Turk in a turban. This mould is signed Jarrin Fecit (Jarrin he made). These intaglio motifs are for making free-standing features - once knocked out of the mould, the two halves were joined together. He probably used these figures for ornamenting the tops of twelfth cakes, for which he was famous. Unfortunately, I have not yet located any images of Jarrin's ornamented cakes. But in the trade card below, advertising the wares of one of his London competitors, a twelfth cake surmounted by a group of tiny figures can be seen on the stand on the right. 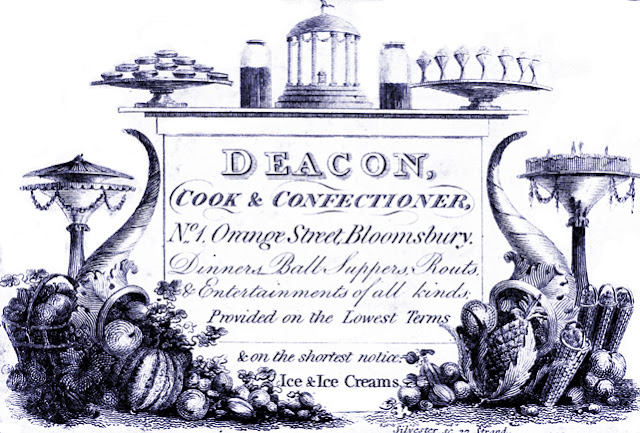 Now we know of another mould carved by Jarrin, because yesterday I bought a small, but spectacular collection of early nineteenth century confectioner's moulds, which included the striking specimen below which depicts a winged Egyptian mask signed by him on the side. Unusually it is dated - 1820, the very year in which his book was published and portrait engraved. You can imagine my excitement! It is also exceptionally large, taking up almost the full length of a ten inch long block of pear wood. The mould still retains small residual patches of gum paste and starch, though it would be romantic to think that these were left by Jarrin, as the mould may have been used by a more recent confectioner. Jarrin was declared bankrupt in 1828 and in an inventory of his goods are listed 'Moulds, tools and different apparatus' to the value of £200. No doubt this newly discovered mould was once among these items.

Egyptian motifs in architecture, furniture and the decorative arts were very popular at this period. Napoleon's campaign in Egypt (1798-91) and Nelson's victory at the Battle of the Nile (1798) had created a fashion for all things Egyptian in both France and England. In 1807, the Sèvres manufactury near Paris produced a vast porcelain dessert service based on Egyptian motifs which was gifted by Napoleon to Czar Alexander I. It can be seen at the marvellous Kuskovo Palace Museum near Moscow. Another version is on display at Apsley House in London, originally ordered by Napoleon for Josephine, but given as a gift to the Duke of Wellington by Louis XVIII of France.

Two seminal publications, Charles Percier and Pierre François Léonard Fontaine's Recueil de décorations intérieures (Paris:1801) and Vivant Denon's Voyage dans la Basse et la Haute Egypte (Paris:1802) both contained beautiful plates which helped spread the trend for Egyptian based design. In England, the traveller and interior decorator Thomas Hope (1769-1831) was one of the arbiters of taste who was instrumental in popularising the fashion for all things Egyptian in London. His book Household Furniture and Interior Decoration (London: 1807) includes an engraved illustration of an Egyptian room in his own house in Duchess Street off Portland Square, which he designed to house his collection of Egyptian antiquities.

Some of the most extraordinary examples of Egyptian influenced tableware from this period are a series of silver tureens designed by the great Regency silversmith Paul Storr. The earliest set was made as part of the 'Grand Service' for the Prince of Wales, later George IV (1762-1830) in 1802-3, for his dining table at Carlton House. In 2000 the Royal Collection generously lent one of them to us for the exhibition Eat, Drink and be Merry and there are some excellent photographs of it in the book of the same name, which I edited. A very similar set made in 1807-08 for the Duke of Cumberland can be seen in the Gilbert Collection in the V&A. Unlike the Royal Collection set these are not gilt. If you look carefully at the example below, you can see an Egyptian winged mask very much like that carved by Jarrin on the lower part of the bowl.
So the Prince Regent and his Carlton House guests enjoyed their soups served from Egyptian style tureens But what of Jarrin's mould? It is a sugar paste mould, probably used to make a motif for a complex sugar caprice for a dessert centrepiece. Certainly something much grander than a twelfth cake. When gilded this object was probably indistinguishable from some of the real silver gilt metalwork on the table. So did Regency diners actually enjoy eating food with a pharaonical theme? Well the evidence points to the fact that they did and not just as sugar decorations on fancy table ornaments. After the Battle of the Nile in 1798, Josiah Wedgewood started manufacturing creamware flummery and jelly moulds with Egyptian motifs. He produced moulds embellished with such motifs as the Nile crocodile, the sacred musical instrument known as a sistrum, funeral urns, lotus flowers and dozens of other ancient Egyptian symbols. Below is a selection of some of these unusual moulds.

A couple of months ago, I was called upon to produce a full Regency ball supper for a forthcoming BBC documentary called Pride and Prejudice, Having a Ball. The programme celebrates the bicentenary of Jane Austen's wonderful novel by attempting to recreate the Netherfield Ball at Chawton Hall, her brother's home in Hampshire. It will be screened here in the UK fairly soon on BBC2. As this was meant to be a recreation of a Regency ball, I decided to have at least one ancient Egyptian themed dish on the supper table. So I used a mould in my collection which turns out the curious jelly below. In classical Greece this ram's skull was known as an agricranion, but in this version the skull is surmounted by a sacred lotus flower, so Wedgewood's designer probably concocted it from an Egyptian image he had seen somewhere or other. I cannot guarantee if you will see this colourful dish on the table in the programme, as I have no control over how it will be edited. Besides, across the first course and the dessert there are over 71 different dishes served out in a full scale à la française supper, so if you blink you will probably miss it anyway. Once the programme is aired I will post some details about the food and table setting that I am sure will be missed in the narrative. 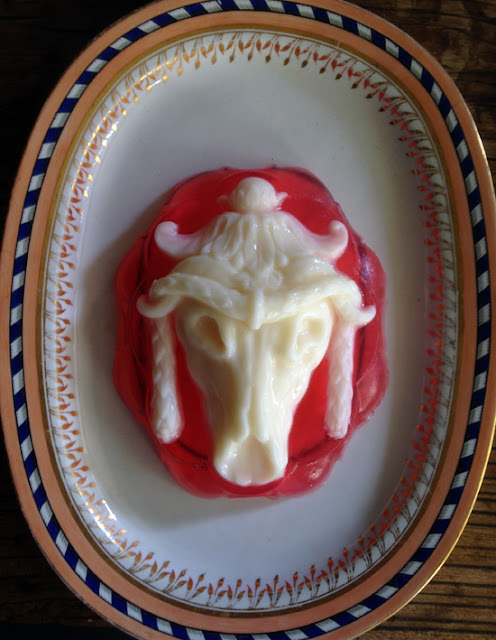 As the nineteenth century rolled on, culinary Egyptomania continued and was particularly well expressed in a number of pharaonical ice creams. Ice cream pyramids, obelisks and even sphinxes appeared on the scene. In my own collection I have a couple of obelisks complete with hieroglyphics and the two small sphinx moulds below. 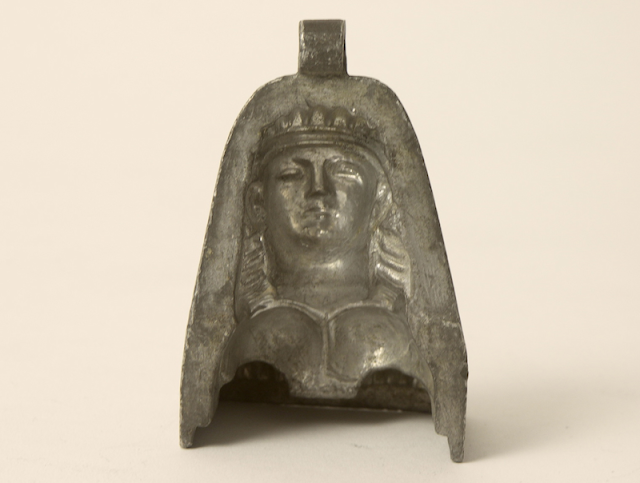 I mentioned at the beginning of this post that  I acquired Jarrin's Egyptian mould in a group of others. The remainder are unsigned, but Jarrin had a distinctive carving style and I suspect that some may also be by his hand. One of these allows a crown to be made out of sugar paste by flexing the sugar pressing round a former into a circle, a common technique that was also used to make three dimensional sugar baskets. I thought at first this may have been for making a royal crown for the top of a twelfth cake. But on the verso of the same mould - it is carved on both sides - there are some large ostrich feathers. In fact it was actually designed to make a sugar Prince of Wales feathers ornament.

One of Jarrin's contemporaries, the Yorkshire confectioner Joseph Bell, actually illustrated a cake surmounted by a sugar paste Prince of Wales feathers in his A Treatise of Confectionery (Newcastle upon Tyne: 1817). Bell's cake is decorated with swags and drops, garter stars and patriotic emblems in the form of the flowers of England, Scotland and Wales. I own plenty of Regency period moulds for making all of these ornaments, with the exception of the lion and the unicorn. But I expect one day they too will turn up. When they do, I will make the cake for you.

By the way, the ghost of Joseph Bell's daughter Eleanor is said to haunt the beach at Scarbororough, where he had a confectioner's shop. In 1804 she was tragically murdered and her body left on the beach at  Cayton south of the town. Her killer was never found. More on her distraught father Joseph, another forgotten British 'food hero' in a later post.
Paul Storr's Egyptian tureens in the Royal Collection

For  information on the influence of the Egyptian style in Europe, see Patrick Connor ed., The Inspiration of Egypt: Its influence on British Artists, Travellers and Designers, 1700-1900 (Brighton Borough Council, Brighton, 1983); and Jean-Marcel Humbert, Egyptomania: Egypt in Western Art, 1730-1930 (Réunion des Musées Nationaux, Paris, 1994).
Posted by Ivan Day at 17:19