For those of you who research the history of food these days, you have a much easier time finding sources than I did when I started getting a taste for the subject in the early sixties. Nowadays there are many online scanned and transcribed texts of period recipe collections, as well as modern reprints and facsimiles. If I wanted to consult one of these rare works I would have to go to the British Library and look at an original copy. The trouble was I was only thirteen when I first got interested, which was too young to have a reader's pass. So the only alternative was to buy originals with whatever pocket money or holiday job wages I could muster. The first cookery book I ever bought was John Nott's Cook's and Confectioner's Dictionary (London: 1723). I found a good working copy for about 75p ($1.00). When most of my friends were spending their spare time listening to the Beatles or the Stones, I was trying to learn to cook out of this masterpiece of baroque gastronomy. I thought I had discovered a golden age of British food and just had to learn more. So, once I had learnt how to seek out and buy books of this kind, I spent every penny I had on acquiring more, and more, and more! Armed with a copy of Arnold Whitaker Oxford's bibliography, I started hunting out some of the key works he describes in what became my bedside bible.* 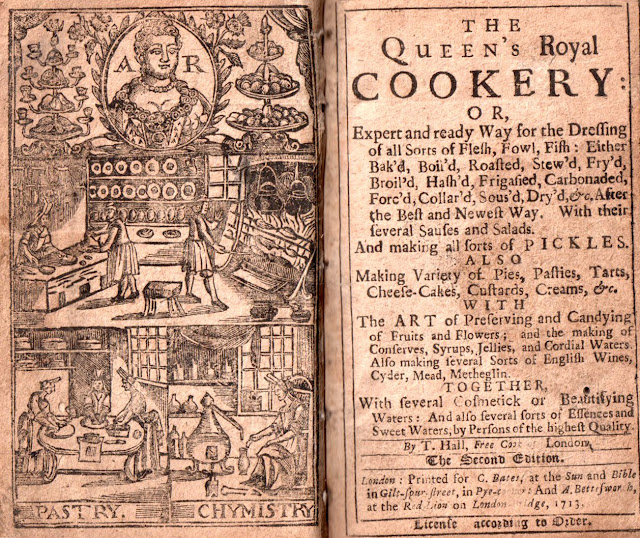 I was lucky. With not too much outlay, by the time I was sixteen I owned good original copies of works by Gervase Markham, Joseph Cooper, Kenelm Digby, Hannah Wooley and a few other Jacobean cookery writers. In 1967 I cashed my £40 premium bonds to buy a perfect copy of John Parkinson's Theatrum Botanicum (London; 1640). This teenage obsession grew into a lifelong passion, the result of which is a lovely and incredibly useful book collection. An early purchase which really tickled me, was Mr Oxford's own copy of T. Hall's The Queen's Royal Cookery. It was an imperfect one with a note in Oxford's hand explaining that the last page of the text was missing, but it only cost me half a crown (twelve and a half new pence)! I have since found a better copy, but I had to pay a lot more than that for it. 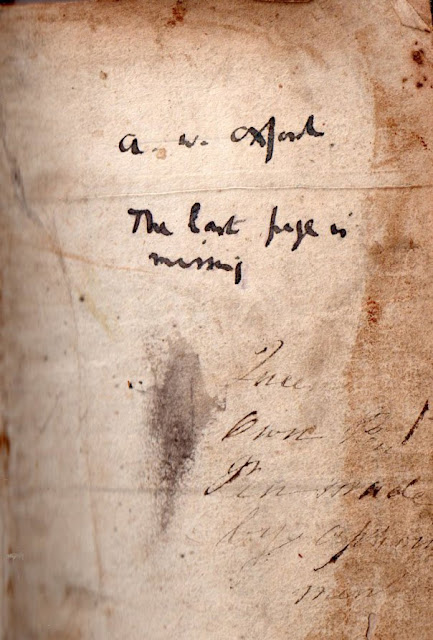 By the time I was in my twenties, I became particularly interested in works on confectionery. The very first I acquired was a second edition of Borella's The Court and Country Confectioner (London: 1772). It was this marvellous little book that kindled an early interest in ice cream and I was soon attempting to learn how to make ices using the methods described by this head confectioner to the Spanish Ambassador . 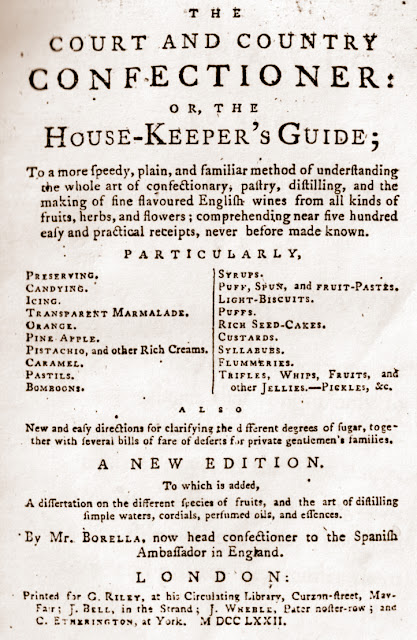 I remember buying this particular book in July when the elder bushes were in flower, so I had to have a go at making his Muscadine Water Ice, a lemon sorbet flavoured with elder flowers. This was the very first period ice I ever made. I used salt and ice in a bucket and an old milk can because I did not at the time own a sorbetiere. Once I had figured out Borella's rather confusing instructions with his cross references to other recipes, I got it to work really well. What amazed me was the incredible smoothness of the finished ice - no detectable ice crystals and a silky feel on the tongue. In a brief footnote to his recipe, Borella (we do not know his first name) explains that a variation on the theme was to make the ice with white currants. 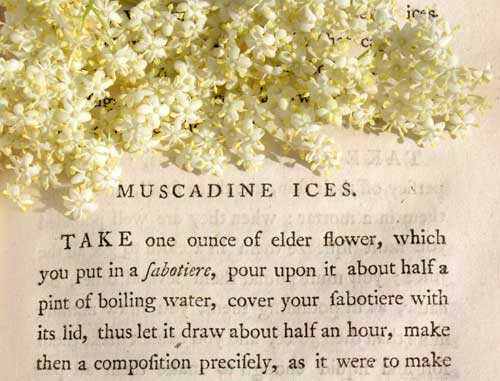 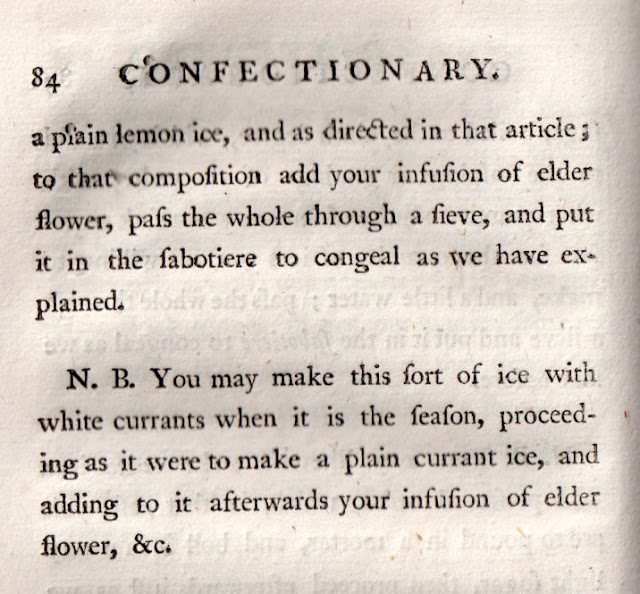 This unassuming little N.B. is one of those treasures that occur from time to time in our culinary literature, where in a brief note a truly wonderful masterpiece of a dish is delineated. I managed to get hold of a huge basket of white currants from a friend in Sussex and had a go. What a revelation! This was in 1971, when many considered British gastronomy to be in a trough of despond. Not in my London flat it was n't! I fed my flatmates with this icy nectar and they were truly astonished. Marine Ices had been open for a few years down the road in Chalk Farm, at the time about the only place in London where you could get decent ice cream. But as nice as their ices were, Mr Borella's Muscadine Water Ice with elderflowers and white currants was on a much higher plain.

I had a lot of the currants left over and with them made another eighteenth century delicacy, white currant shrub, from Charlotte Mason's The Lady's Assistant (London: 1773), though delicate is probably the wrong adjective to describe this fiery high octane liqueur. Again, the recipe is in the form of a very brief note, the use of white currants just an alternative suggestion to red ones. I made about a quart with my currants - again a superb forgotten use for these translucent, pearl like fruits.