Salads to reach round the world

Minimalism and simplicity were not features of high status life in the seventeenth century. Intricate aesthetic and allegorical schemes dominated the fine and applied arts of the period. A baroque ceiling painting in a church in Rome - or nearer to home - a Purcell anthem, or a Grinling Gibbon's overmantel, are all survivals of an age when complex, florid forms were much to the taste of both Church and nobility. Even in fields like medicine, there was a tendency towards complexity. A remedy might have many ingredients in the hope that one may actually be effective. The astrologer and physician Nicholas Culpeper, commenting on a popular 'antidote to plague and pestilence', which was made up of hundreds of different ingredients said "I am very loath to leave out this medicine, which if it were stretched out, and cut in thongs, would reach round the world.'

So it was with food. The more princely cookery books of the period are packed with recipes for complex olios, bisques and other dishes, packed to the brim with a bewildering variety of meats and game birds. Elaborate and highly decorative salads with many ingredients were also fashionable. In this country these were known as Grand Sallets and some recipes have such an abundance of ingredients that they too, when "cut in thongs, would reach round the world". These colourful arrangements were among the most decorative dishes that ever graced the English table. Take the recipe below from 1709  -

Unlike a modern salad this is more like an arrangement of pickles and was designed specifically for winter. As well as pickled garden stuff, such as the French beans and asparagus (sparrow-grass), there are some seafoods - anchovies, pickled oysters and scallops. The sallet also contains two exotics - mango and bamboo. These had been available in England for some time through the East India trade and were imported in pickled and preserved form. Both were served to James II at his coronation feast in 1685. Most eighteenth century cookery books teach us various ways of counterfeiting them. The fake mangos were made from melons or cucumbers and the bamboo with elder shoots. The real articles must have been rare and expensive. Flowers were also pickled in the summer months to make very decorative salads for winter.

Many recipes for grand sallets feature a 'standard', a decorative feature like the sprig of bay laurel described here. Others, such as the one illustrated at the top of the page are embellished with a sprig of rosemary, in this case flicked over with whipped egg white to represent snow and therefore suitable for a winter table. The twig was usually stuck into a half lemon or other fruit, or into a mound of disguised butter.

Complex salads were also a favourite dish on the baroque table in Spain and Italy, where they were known as royal salads. My favourite insalata reale is from Naples. It appears in Antonio Latini's Lo Scalo Moderna (Napoli: 1692 and 1694). The recipe is below. Like English winter salads, this heroic concoction contains a lot of preserved items such as olives, capers, botarga, anchovies etc. One of the more unusual of these is tarantello, salted tuna belly, a very important ingredient in Italian renaissance cuisine. It is very, very difficult to get hold of these days, but I make my own. If you like anchovies, you will love tarantello.


Take endive, or wild chicory, mince it finely and put it to one side, until you have prepared a large basin, at the bottom of which are eight, or ten biscottini, friselle, or taralli, soaked in water, and vinegar, with a little white salt; put the said chopped endive on top, intermix with other salad stuff, albeit minced finely, make the body of the said salad on top at your discretion, intermix with radishes cut into pieces lengthways, filling in the gaps in the said basin with the ingredients listed below, all arranged in order. Pinenuts four ounces; stoned olives six ounce; capers four ounce; one pomegranate; white and black grapes ten ounces; twelve anchovies; tarantello (salted belly of tuna) four ounces; botargo three ounces; comfits six ounces; preserved citron and preserved pumpkin twelve ounces; four hard boiled eggs; whole pistachios four ounces; four ounces of raisins; other black olives six ounces. Caviar, four ounces; minced flesh of white fish, six ounces; little radishes, salt, oil, and vinegar to taste, garnish the plate with slices of citrons, and citron flowers round about in order, take heed not to add salt or seasonings, until it goes to the table, and is about to be eaten.

The Leeds symposium on History and Traditions on 21st April this year is on the subject of vegetables. I am reading a paper on salads, so expect to see much more on the subject on this blog. I will leave you with a close up of T. Hall's Grand Salad of 1709. Yummy - especially those pickled scallops and oysters! 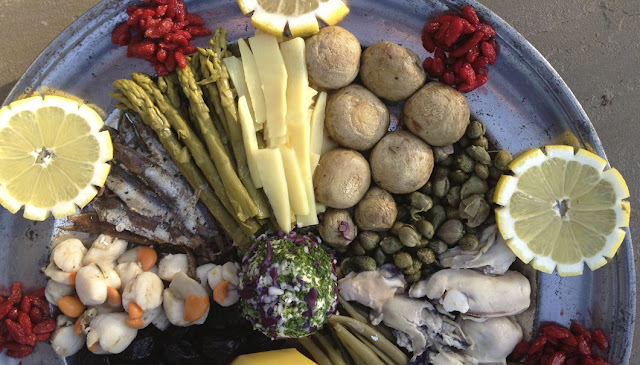