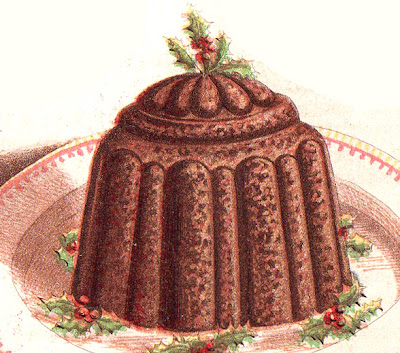 One thing that really, really annoys me is a tendency in the world of food journalism, broadcasting and food writing to continuously repeat stories about the history of our food which have very little basis in fact. Many food writers, celebrity chefs and yes, even people who actually describe themselves as food historians are guilty of this. This is a plea to all of you out there to stop accepting secondhand, often suspect statements without questioning the sources upon which they are based. I have already given some examples on this blog of this uncritical approach and in the future, I will offer you many more. And I will spare no blushes.

Perhaps no other food in the English culinary canon has been subjected to this process of popular mythologising more than Christmas pudding. In her book Food and Cooking in Victorian England - A History (Greenwood. Westport CT: 2007, pp.149-50), Andrea Broomfield, Associate Professor of English at Johnston Community College, tells us,


‘The plum pudding’s association with Christmas takes us back to medieval England and the Roman Catholic Church’s decree that the “pudding should be made on the twenty-fifth Sunday after Trinity, that it be prepared with thirteen ingredients to represent Christ and the twelve apostles, and that  every family member stir it in turn from east to west to honor the Magi and the supposed journey in that direction.”


Now being a professor, Dr. Broomfield naturally provides us with a reference for her source. I was hoping that she had consulted the original medieval decree, because I would love to see it myself. But no, she refers us to a book written by the celebrated English actor Simon Callow called Dicken's Christmas (Francis Lincoln. London: 2003), which she quotes. Mr Callow is a brilliant thespian, in fact he is one of my favourite actors, but he is not noted for his research into English pre-Reformation Ecclesiastical decrees, or Christmas pudding for that matter. His book is an attractive one and is full of interesting information, but it is unreferenced and he repeats a number of the usual annoying cliches about Christmas foods, such as mince pies being representations of Christ's manger etc. Unfortunately Mr Callow does not give us a reference for the source of his information, so where it comes from is anyone's guess. If by any slim chance, you read this posting Mr Callow, I would be grateful if you could let me know your source. By the way, I loved your Dr Marigold and Mr Chops at the Riverside Studios!


Broomfield/Callow are nowadays quoted by Wikipedia in their article on Christmas Pudding and as a result the medieval decree theory can be seen all over that most efficient myth spreader in the history of mankind, the world wide web.


But is there anyone out there who can tell me where I can find a copy of the original decree? Did it really exist? I am genuinely offering a $1000 reward to the first person who can find me the original medieval text of this so-called decree and point me to the library in which it is housed. If the decree came from the very highest authority - the pope, I suggest you start by looking in the Vatican archives for a papal bull, motu proprio or papal brief.  Perhaps it was a decree created by one of the Ecumenical Councils, or since it was specifically aimed at the English congregation, it may have been issued in our own ecclesiastical province at a synod under the authority of the Archbiship of Canterbury. Anyway, brush up your Church Latin and I wish you all good hunting in the archives. The reward will be valid until midnight on 24th December 2012, when the offer will close. Good luck! There will be much more on Christmas Pudding in a future posting.