If you have ever been to Prague at Christmas time you will almost certainly have visited the wonderful Christmas fair held in the Old Town Square. Although it is always pretty cold at this time of year, street vendors selling hot punch, spit roast ham and a host of other Bohemian street foods, offer plenty of opportunities to warm up by the fires at their stalls while you enjoy their wares. One hot delicacy which I particularly love is Trdelník, a spit roasted cake which is one of the most fascinating foods on offer. This is made with a sweetened yeast dough, which is spiralled round a metal cylinder, rolled in sugar and spices and then rotated rapidly over hot charcoal. The sugar caramelises on the outside making the crust of the Trdelník very crispy. It is delicious.

Trdelník is closely related to Kürtőskalács, an ancient chimney cake which has been made in Hungary for a long time and which is said to have originated in Transylvania. Many other European countries have cakes which are also baked on specialised spits in front of a fire. In Austria there is Prügelkrapfen, Germany has Baumkuchen, Sweden Spettekaka, France gateau à la broche, which is closely related to the Šakotis of Lithiania and the sękacz of Poland, both used to celebrate Christmas and at weddings. And there are others. There is a recipe for baumkuchen in Marx Rumpoldt's Ein new Kochbuch (Frankfort: 1589). And Conrad Hagger in Neues Saltzburgisches Koch-Buch (Augsburg: 1719) gives an illustration of a specialist spit fitted with a wooden cone for making the sensational Hapsburg pyramidal spit cake.below. 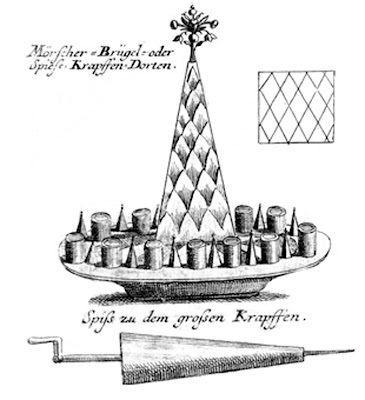 But what about Britain? Well I am afraid that just about the only thing that you will see rotating on a spit nowadays in this country is a doner kebab. There are no contemporary spit cakes. Which is a sad state of affairs, since the British were once famed throughout Europe for the quality of their spit cookery. However, at one time there was an English spit cake, probably the most unusual in the whole of Europe. Sadly it has been extinct since the days of the Plantagenet monarchs. There are a number of recipes in some fifteenth century court cookery books. It was usually called a trayne roste, though there is a variant called a hastelet of fruit. The recipe below is from Harl. Ms. 4016 in the British Library. It dates from about 1420.


Take Dates and figges, and kutte hem in a peny brede; And þeñ take grete reysons and blanched almondes, and prik hem thorgh with a nedel into a threde of a mannys length, and one of one frute and a-noþer of anoþer frute; and þeñ bynde the threde with the frute A-bought a rownde spete, endelonge þe spete, in maner of an hasselet; And þeñ take a quarte of wyne or Ale, and fyne floure, And make batur thereof, and cast thereto pouder ginger, sugur, & saffroñ, pouder of Clowes, salt; And make þe batur not fully rennyng, and noþer stonding, but in þe mene, that hit may cleue, and than rost the treyne abought the fire in þe spete; And þeñ cast the batur oñ the treyne as he turneth abought the fire, so longe til þe frute be hidde in the batur; as þou castest þe batur there-on, hold a vessell vndere-nethe, for spilling of þe batur/ And whan hit is y-rosted well, hit wol seme a hasselet; And þeñ take hit vppe fro þe spit al hole, And kut hit in faire peces of a Spañ length, And serue of hit a pece or two in a dissh al note.

I recently roasted a trayne roste for the Hairy Bikers, a popular television food programme produced for the BBC. For those who would like to see in detail the very interesting process of making this extraordinary cake, here is the video below.


There is some more information about trayne roste and other spit cakes on my website
Posted by Ivan Day at 13:02