When I started collecting antiquarian cookery books as a teenage schoolboy nearly half a century ago, the third or fourth one I bought was Charles Carter's The Complete Practical Cook (London: 1730). This magnificent volume is well known to collectors for its spectacular plates of baroque table layouts, but for me it is one of the truly great English books out of which to cook. Carter's recipes are distinctly different from those of his contemporaries. Some are spectacular. I have already posted a page on my website about his marvellous Banniet Tort, a kind of pancake pie with preserved peel, but my favourite pastry dish from his recipe collection is one he calls a prunella and tamarind tort. 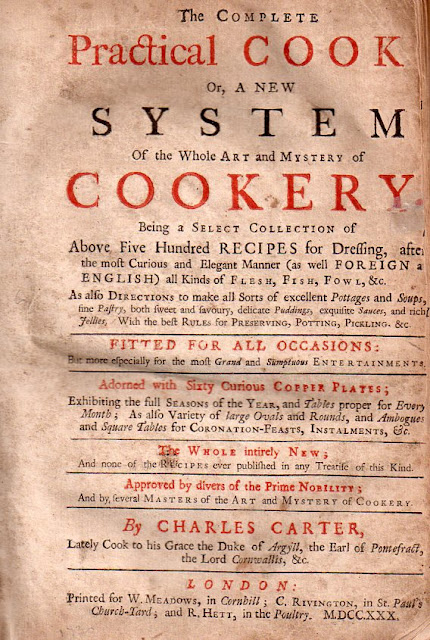 Prunellas, or prunellos were dried plums, what we call today prunes. During Carter's lifetime these were imported to London from Portugal and Spain. A few of the celebrated prunes de brignolle also found their way here from France, but most appear to have come from the Iberian Peninsula and the Straights. After explaining how many prunellos were imported in 1694-5, John Houghton F.R.S. tells us 'they are something used in physic as a gentle purging medicine, but I think their greatest consumption is ordinary folk selling them stewed, and what is put into plum-pottage at Christmas. The quantity at first sight seems large, but if there be eight millions of people in the kingdom, it is not an ounce and quarter for each; for it makes but 9972480 ounces.'* So with an annual consumption as low as this, prunes were not as common as they are now. I have made Carter's tort with prunes a number of times and it is excellent, but I prefer to use his alternative of tamarinds, a fruit which was much rarer in eighteenth century England. This delicious custard tort is a spectacular use of this wonderful acidic fruit, which found its way here via the East India Company.

It is not clear from Carter's recipe whether he intended us to put the prunes or tamarinds into the tort intact, including their stones. Prune stones are easy enough to remove, but tamarinds are a little more troublesome. We have all become such lazy eaters nowadays that we expect the kitchen to have already removed bones, pips and stones from our food before it is placed before us. Our ancestors were not so fussy, so it is likely that the prunes or tamarinds were put in whole, just as pigeons were into pies. However, what I do is to remove the seeds from the tamarind pulp and roll the flesh into little balls which I scatter round a blind baked pastry case before I pour in the cinnamon and mace flavoured custard.

I serve slices of Carter's tamarind tort with a truly delicious tamarind ice cream, which I make from a recipe from another marvellous book - John Conrade Cooke's Cookery and Confectionery (London: 1824). Here it is below. Cooke also gives us a stunning Tamarind Water Ice. So in English cookery, tamarind was not just an ingredient of Worcester Sauce. 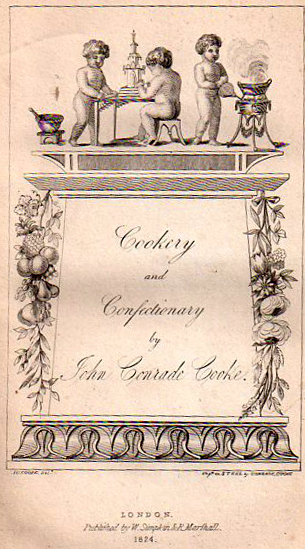 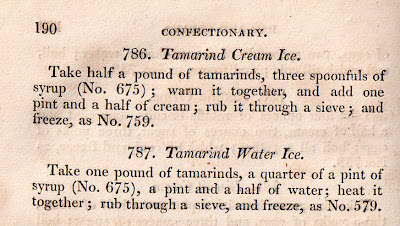