Just before Christmas I was in St Alban's Cathedral recording an interview on twelfth cakes and other Christmas food with Edward Stourton for the BBC Radio 4 programme Sunday. After the recording I had an interesting conversation with Dr Jeffrey John, the dean of St Alban’s about another traditional, but more local cake – the St. Alban’s Bun. This is sometimes described as the ancient prototype of the well-known hot cross bun, which was once only eaten on Good Friday. Hot cross buns can now be bought all year round in most supermarkets. Even ‘gourmet’ versions are appearing on the scene. Heston Blumenthal’s Earl Grey and Mandarin Hot Cross Bun was recently launched by Waitrose, who also market another flavoured with cherry and dark chocolate. The British are a curious race. We allow most of our real domestic traditional foods to become totally extinct and then happily buy a factory-made one all the year round that was intended just to be eaten on one day!

According to Dr. John, there is an extant recipe for St Alban’s buns kept at the cathedral. It is said to date back to 1361, when a local monk called Thomas Rockcliffe first started distributing them on Good Friday to the poor of the city. As far as unusual ingredients are concerned, Rockcliffe’s recipe could give Heston Blumenthal's a run for its money, as the ancient bun is flavoured with 'grains of paradise'. This spice is hardly known today, but was common enough in medieval English cookery. It was a costly, high status ingredient, though a cathedral close or monastic kitchen is the sort of place you might have found it in the fourteenth century. Abbots and their kind had aristocratic tastes, but did they want to share the expensive contents of their spice cupboards with the poor?  I guess if you are going to spice up a bun with religious significance, grains of paradise would be an appropriate choice. I have not seen the recipe, so do not know if it is in an original manuscript or in the form of a later transcription. Who am I to doubt the word of a man of God? But as someone who is very sceptical about the phenomenon of the 'ancient secret recipe', I would want to see the original before I am completely convinced of its authenticity.


Another unique feature claimed by the dean for the St Alban’s bun is the way in which it is embellished with a cross. Rather than having two crossed lines piped across the top, which is the modern way of embellishing the bun, the mark of the cross is pressed or slashed into it. This last fact interests me a great deal, because I remember that the hot cross buns we ate in the 1950s, were marked in this way. And my family did not live in St. Albans. Those piped with lines of dough only started to appear later in my childhood. There are directions to stamp buns with a cross in some nineteenth century recipes. The Victorian baker Frederick Vine in Saleable Shop Goods (London: 1898) even gives us illustrated instructions on how to make a bun docker, the tool used to do the job. For some years now I have been using one of these to mark my hot cross buns. If you want to make one yourself, here are Vine's instructions.

How to Make a Bun Docker.

Take two thin pieces of hard wood about 3 ins. long,   2 ½ ins. wide, and ¼ in. thick. The sides of a cigar box  would supply it very well, and then with a fine, sharp  meat-saw cut a slot in each piece (as shown in Fig. 38).  Now by reversing one piece, and fixing the two slots  together, you form a cross.


Having made the blades, the next thing is to get a solid piece of wood about 3 ins. square and l ¼ ins. thick, and with the saw cut a groove evenly in it, in which to tightly fix the cross. Have  four long French nails and drive them into the block,  one between each blade of the cross, as shown in the sketch (Fig. 39), and then file them up to sharp points;  have some glue melted and fix in the blades, sharpen  up with a knife, and your docker is complete.


You  will find this wooden cross far and away before any made  of metal you can use for the purpose, as it will not cut  the buns into four separate pieces, but only just sufficient  for your requirements.

The dean and his colleagues have recently been in the headlines for wanting to claim the hot cross bun back for Good Friday. They dislike the fact that it is available all year. I agree with them. I see no reason why Heston's bun (which I have tried and it is delicious) and all the other mass-produced ones that appear all year round in the shops should be marked with a cross. They would taste just the same if they were made without one and were just called buns. There is something special about a dish that is eaten on one day of the year only. But of course, the supermarkets will never agree to this. Recently, however the Sainsbury in-house bakery in St. Alban's have been making some Alban buns for the cathedral. They have substituted cardamom for the original grains of paradise. The latter are a cardamom relative, though they come from West Africa rather than Asia and have a very different flavour. I made an experimental batch with real grains of paradise yesterday and they were tasty, but pungently peppery. I will make them again on Good Friday morning.

St Alban's cathedral has a bit of a history when it comes to unusual flavours (and for duping its visitors). When the humanist scholar Humphrey Duke of Gloucester died in 1447, his body was buried in the cathedral in a beautiful perpendicular gothic tomb. In the eighteenth century,  his coffin was opened and the body was discovered to be perfectly preserved in alcohol. All who saw it were amazed at how well he had weathered four centuries in his marinade of aqua vitae. The cathedral vergers started selling the Humphrey-flavoured liquid in small bottles as a cure-all and cosmetic wash to counteract ageing. When it ran out and the body started to decay, they went to the local taverns to buy more spirit to top up the coffin! 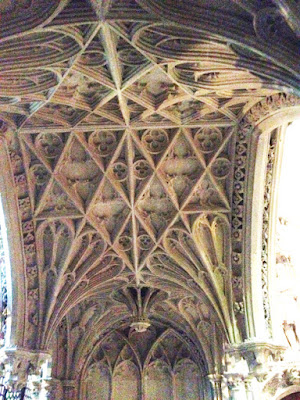 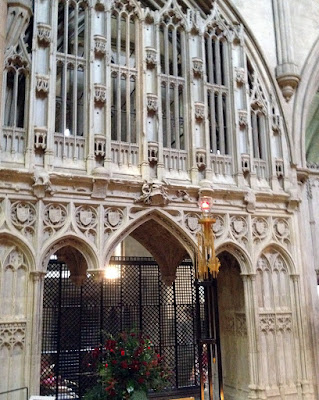 Coming back to hot cross buns, these cakes actually have a rather opaque history, which is too complex to deal with in a mere blog posting. It would need a sizeable book to do justice to the subject. As with a lot of folk foods, they possess a remarkable power to continue to generate myths about their origins. As was their wont, eighteenth and nineteenth century antiquarians like John Brand, William Hone and Robert Chambers were all keen to link them with rituals and foods from classical antiquity and the pre-christian era. Their interesting, yet conjectural theories form the basis of much of the hot cross folklore that survives to this day. This has happened to such an extent that a number of journalists have recently questioned St Alban's claims to the oldest bun. 'But they had hot cross buns in ancient Greece' they cry, - or 'the hot cross bun evolved from a ritual cake sacred to the pre-Christian goddess Eostre, its four quarters symbolising the four phases of the moon.' As if this were all indisputable truth. Here is a link to a clip of a St Alban's cleric being interrogated in this fashion -

I often get interviewed by the media at this time of year about hot cross buns and their history. Here is a link to a BBC website article from 2010.

How did hot cross buns become two a penny?
Posted by Ivan Day at 13:58