Our Penrith ox roast was the brainchild of Frank Jackson, a friend of mine who is a master butcher and caterer. Frank hails from four generations of master butchers. He was assisted in preparing the ox for the spit by his friend and fellow butcher Tony Willetts. Since at least the sixteenth century it was always the local butchers who roasted oxen, so Frank and Tony were continuing this ancient tradition. In the past many butchers owned the necessary equipment and possessed the skills and experience required to carry out what is a demanding and difficult task. Unfortunately ox roasting is no longer part of a butcher's training so Frank came to me about six months ago to discuss how he should proceed. I have had some experience of roasting oxen and have written on the subject. Frank had had experience of contemporary style 'hog roasts', where a pig is rotated over a bed of charcoal or gas flames. This practice was rarely carried out in the past because it is actually not a very good way to roast any animal - fat drips on the coals and flairs up, sometimes making it difficult to control the fire. Roasting a 640kg animal using this method would be very difficult and probably disastrous. You can get away with a pig, but a large bovine needs to be slowly roasted in front of the flames, not over them. Unfortunately, the mistaken idea that meat was roasted 'over a fire' has taken such a hold, that the British have forgotten the most basic techniques of what was once their national style of cookery. To cook over the flames is 'to broil' or 'to barbecue', not to roast, which was always done in front of the fire. Frank decided he wanted to have a go at the traditional method. Some other towns have been 'roasting' oxen for the Jubilee celebrations, but they appear to have gone down the route of getting so-called 'barbecue chefs' to dig fire pits. This is not how it was done in this country in the past. Temporary roasting hearths were always built out of brick - just look at the evidence in the historic photographs and images below.

Originally an ox was put down to the fire by impaling it on a sturdy spit. This was placed directly under the animal's spine and secured to it by a number of large staple-like skewers. Unfortunately, this method is impossible to carry out now in the UK, because the law demands that the animal's spinal cord has to be removed. This means that a modern ox or bullock is divided right down the centre of the spine into two separate halves making it impossible to spit it in the time-honoured way.
In order to fit our divided ox on to a spit we had to commission a blacksmith to construct a specialised cradle spit. Frank and Tony decided to subdivide the carcass again into forequarters and hindquarters for ease of carving and serving. The video above shows how the four quarters fitted into this cage-like basket or cradle. In order that the spit could be turned with little effort by one person, a large stone block was lashed to the spit wheel direcly in line with the lightest side of the carcass. This was a standard technique in the past, which can clearly be seen in some of the old photographs below. We roasted our 640 kg monster for 30 hours. Volunteers turned the spit in shifts throughout the day and night. Frank and I cut the first ritual slice of rump off the rear quarter with the 5th Earl of Lonsdale's extraordinary 1890s ox carving knife and we served it on my 1887 plate. Despite a black caramelised surface and being rather well done, this meat really had an extraordinary texture. It literally dissolved on the tongue like savoury marshmallow. It was marvellous. In some of the deeper reaches of the prime joints there was plenty of rare, but perfectly cooked meat. We fed about 400 people, though there was enough meat for at least 600. 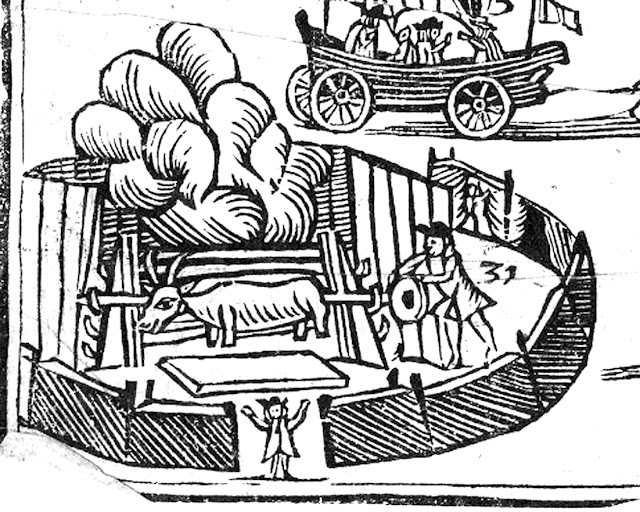 This very interesting video includes some amateur footage of an ox roast which took place in Ledbury in Herefordshire in 1953 for the Coronation of Elizabeth II. Note the two cartwheels on the ends of the spit for ease of turning.