Most British recipe books from the late fourteenth century onwards usually contain a recipe or two for gingerbread. Throughout its long and complex history this ancient baked good has gone through many transformations. Medieval and early modern versions were very different to the soft spongy cakes, tray bakes and anthropomorphic children's biscuits that are usually sold under the name in contemporary Britain. From time to time on this blog I will look at aspects of gingerbread's remarkable evolution, focussing particularly on some of the high points in its development before it became degraded into the currant-eyed homunculus of the modern bakery aisle. If surviving moulds are anything to go by, most gingerbread men in the past were far more sartorially elegant than the naked Mr Men of today. And there were plenty of well-dressed gingerbread women too. Just look at King William and Queen Mary further down this page. But what I want to touch upon in this brief posting is a type of commercial gingerbread which was once commonly sold in just about every street corner baker's shop, but which seems to have died out in the years leading up to World War I. Known as block gingerbread, this ubiquitous mainstay of the baker's trade was a dark treacle-flavoured variant on the theme, which was usually printed with a patriotic design, most often a royal crown or the royal coat of arms.

Surviving moulds for block gingerbread sometimes have the name of the baker carved on them, as in the two examples above, which are in my own collection. These moulds have a fascinating history. They are inscribed with the name J. Scrymgeour. This was John Scrymgeour (1827-1891), a prominent Dundee baker active in the second half of the nineteenth century. Scrymgeour's old friend Thomas Robertson captained the ship Active, which with three others went on an exploratory whaling expedition from Dundee to the Antarctic in 1892-3. Robertson named Cape Scrymgeour on Andersson Island in the recently deceased baker's honour. Perhaps its red granite cliffs reminded him of his old friend's gingerbread! On the same voyage Robertson also discovered and named Dundee Island and the Antarctic Firth of Forth.

Scrymgeour's two moulds were designed for making two different sizes which were sold at different prices. Like many of these moulds they are carved in a primitive style, the supporters on either side of the highly stylised royal arms looking rather like cartoon animals. This was probably intentional on the part of Mr Scrymgeour, as the principal devourers of cheap block gingerbread were children.

By the time Mr Scrymgeour was selling his wares to the hungry juveniles of Dundee, the tradition of moulding gingerbread into patriotic designs was already a well established practice. Sometimes they were formed into a likeness of the reigning monarch and his queen. As well as the fine examples below of William III and Mary, there is a similar mould from the 1830s in the Stranger's Hall collection in Norwich which depicts William IV on one side and Queen Adelaide on the other.


The gingerbreads made in these moulds were chiefly produced and sold by professional bakers and confectioners, who kept very quiet about their recipes and methods. There were countless gingerbread recipes in both manuscript and printed sources, but these were of a domestic nature and aimed at housewives. It was not until the nineteenth century that professionals started sharing their secrets in print. One of the first bakers to write extensively on the subject was George Read, who issued The Complete Biscuit and Gingerbread Baker's Assistant as the second part of his book The Confectioner's and Pastry Cook's Guide (London: nd. c.1834).  The intended readers were members of the trade, particularly bakers' apprentices. As a result the gingerbread recipes it contains are quite different from those found in domestic cookery books. Quantities are much larger and processes more complicated. Read tells us about the practice of preparing treacle for gingerbread by getting it to slowly react with various aerating chemicals, such as alum and potash. In one recipe he tells us to add 2 lbs of alum and 4 lbs of American potash to 112 lbs of treacle, though he indicates that this large scale recipe was for use by the gingerbread wholesalers. He tells us that flour was added to this aereated treacle  to make a sponge, which he calls 'light dough'. This was left to mature and then added to the other gingerbread ingredients when required.

Frederick Vine, another professional baker active at the end of the nineteenth century also produced a series of small books aimed at the trade. In one, Saleable Shop Goods (London: 1898), he devotes a chapter to the production of gingerbread. Like Read, he discusses many types and gives some very useful information specifically on block gingerbread. He explains how to prepare the treacle with the  rising agents and how to make it up into a sponge with flour. He tells us,

'The longer this dough stands the better will be the resultant gingerbread. In the old days it was always a rule to put away the gingerbread sponges early in the spring, and then it would be in prime condition for use about September; but at the present time it would, most probably be deemed ripe in from one to three months. At any rate, give it as long as you possibly can, remembering always the longer the better'.

Gingerbread leavened with chemicals such as pearlash (potassium carbonate - this was Read's American potash) were being made in late eighteenth century America, but do not seem to have been produced in Britain until the 1820s. Amelia Simmons, American Cookery (Hartford: 1798), adds pearlash to what was a fairly standard treacle gingerbread mix to get a lighter result. Pearlash and other alkaline leavening agents such as ammonium bicarbonate and sodium bicarbonate were probably used in Britain in the early nineteenth century, but do not appear in the cookery books until the 1820s and 30s when a few recipes are included in manuscript collections. However, the process of maturing the treacle for a long period to make a sponge, seems to have only been undertaken by professionals. In England, some domestic recipes call for the addition of gooseberry vinegar to react with the alkaline leavening agent and create carbon dioxide bubbles in the dough. The professionals realised that treacle itself is a mildly acidic material which also reacts with soda, Its highly viscous nature also allows the tiny bubbles of this gas to be trapped, especially when it is combined with some flour.

Vine also gives some useful details on how to mould gingerbread and provides the illustrations reproduced here. He tells us that,
Blocks (Fig. 104) for gingerbread can be purchased from any of the confectioners' machinists

advertising in these pages. Usually two impressions are cut into one block, the halfpenny on one side and the penny on the other. In some places it is usual to have your name down the centre, but of course, in that case, it will be necessary to have the blocks specially cut for the purpose'.

Mr Scrymgeour up in Dundee obviously went to this trouble, but had two different sized blocks carved rather than one 'with the halfpenny on the one side and penny on the other'. Wooden blocks were carved in larger sizes for making more expensive gingerbreads. Vine gives a number of recipes for these more pricey block gingerbreads, including some richer options, which contain candied orange and citron peel. We made Mr Scrymgeour's halfpenny block gingerbread on my moulded foods course last week (illustrated at the top of this post) by using this recipe from Saleable Shop Goods,

Weigh the flour on to the board, and rub the fat into it; make a bay; lay the peel round, cut fine; put the sugar and spice into it, and wet up with worked treacle (No. 209) (of course before the flour is added) into a tight dough; let it lie a short time. Then take your 6d. or 1s. block; dust them out with flour; scale off the dough into 1lb. pieces; mould them up round; flatten out to the size of the shilling block, and press it well upon it, keeping the dough perfectly square with the edges of the block; then take off, and place on to thick high-edge tins. Tins that we used for this purpose were about 1/8 in. in thickness, and would hold twelve 1s. cakes, four across and three down; dock well with a fork; fix an upset firmly along the bottom, or foot of the tin ; wash over, and bake in a cool oven. When cooked, glaze over with Bun Wash (No. 190), while hot, then cut out and sell at 1s. or 6d. per square, as the case may be. Sixpenny cakes are made in exactly the same way, but, of course, are only half the size. Whole blanched almonds, cherries, sultanas, preserved fruits, and ginger can be added in the place of the peel as required ; but if you add these you will have to weigh the lumps smaller to recompense you for it, especially if you use cherries, almonds, or the more expensive preserved fruits.

The inclusion of finely chopped candied or preserved citrus peels in gingerbread recipes was an old tradition dating back to the seventeenth century. A very early recipe for a treacle gingerbread was included in William Salmon The Family Dictionary (London: 1710). Salmon claims this gingerbread was served to Charles II. 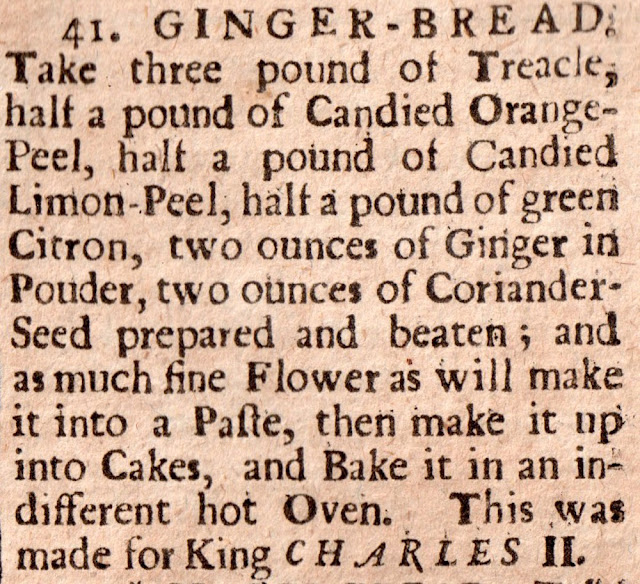 Orange peel and ginger are a great combination and both harmonise well with the strong caramel flavour of treacle. Orange gingerbread was particularly favoured in the eighteenth century and is frequently advertised on confectioners' and gingerbread bakers' trade cards.

Block gingerbread was once made all over Britain, but even when Vine was writing in the 1890s it was getting scarcer. He assumed it was because of the decrease in the frequency of fairs. By the time of the Great War it had disappeared just about everywhere, though an unusual variety of it still survives in a much modified form in the seaside town of Whitby in Yorkshire. What made Whitby block gingerbread unusual is that instead of being formed into printed flat sheets as described by Vine, it was made up into thick loaves. When these came out of the oven they were very hard. They were formerly put into damp rooms for some time to soften. The kind now made in Whitby commercially is not printed, though it is still a loaf with a rather dense texture. The wonderful Whitby Museum has a number of local Block Gingerbread moulds in its collection, which in addition to the royal coats of arms feature the town arms of three ammonites on a shield. Bothams of Whitby, an old local firm, make a modern form of the delicacy, though it is far removed from the block gingerbread of the nineteenth century. 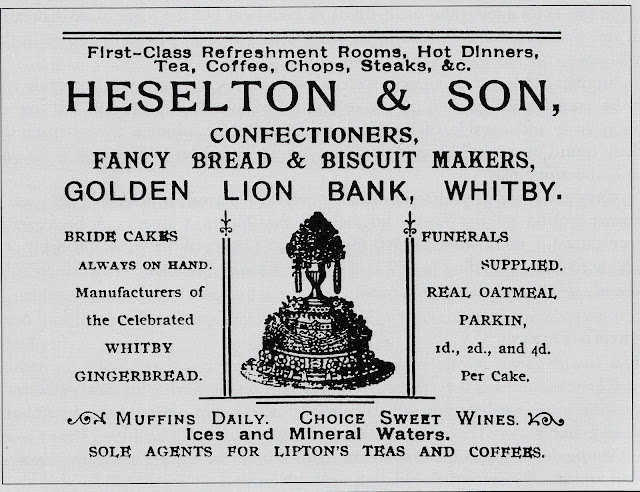