Food History Jottings' research assistant Plumcake has been investigating the evolution of the wedding cake in Victorian England. She has discovered a rich horde of new material which could well be the subject of a future posting (or two) on this blog. She has also unearthed some fascinating references to a number of cakes made for Queen Victoria's Golden and Diamond Jubilees. The most interesting of these is illustrated above, a 10 foot high monster made by Gunters of Berkeley Square in 1887. Completely forgotten now, but at the time news of this massive cake rapidly spread far and wide. The illustration above is from an American children's magazine, the description below from a New Zealand newspaper

HER MAJESTY'S JUBILEE CAKE. Months ago tho firm of Messrs Gunter in Berkley Square asked permission of Her Majesty to present her with a jubilee cake, on the plea that fifty years ago the same firm supplied the inevitable cake at the Coronation. A special stand has been built for this giant cake, and standing on a splendid cloth of crimson plush, it is certainly a monument and a triumph of the confectioner's art. The following description of the jubilee cake may serve to give some idea of its size and appearance. The cake is about 9ft. 6in. in circumference, 10ft high, and weighs, without the decorations, over a quarter of a ton. The design represents the crown, guarded by lions, surmounted by a temple bearing figures of Fame and Glory, with trumpets in their hands, heralding the Jubilee to the four quarters of the world. These again are surmounted by temples crowned by a winged figure of Peace, bearing the crown of Empire; the panels of the base, embroidered in gold on white satin, and each of which is worth three guineas, bear the Royal monogram, and between them are figures in relief representing the four quarters of the world.
Evening Post, Volume XXXIV, Issue 50, 27 August 1887, Page 1.

When I first saw J. M. Nugent's illustration of the cake in Alice Wellington Rollin's article, I was immediately reminded of a confectioner's mould in my own collection which is designed to make two little winged figures of Fame and Glory with trumpets in their hands. This is one of a number I possess which were formerly owned by the celebrated German cake decorator Ernest Schuble. The mould has his initials on the back. Schuble was working in London in 1897 and I wonder if these figures were designed for a Jubilee Cake he made for that year's celebrations. 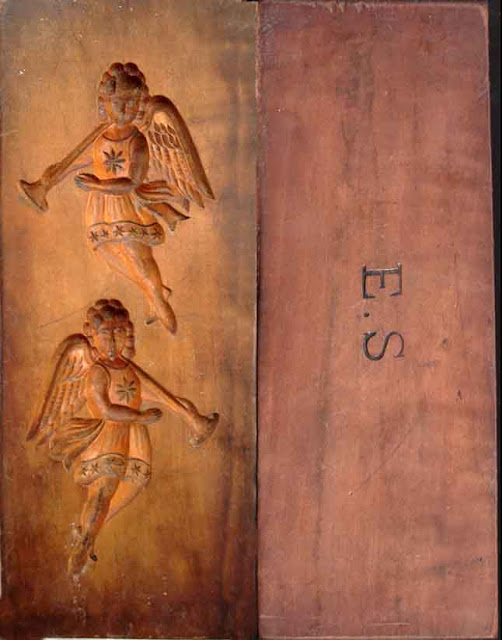 As well as Gunter's mammoth offering, which was the Queen's official Jubilee Cake for 1887, other confectioners tried their hand at these massive architectural caprices. An article entitled Famous Wedding Cakes in The Harmsworth Magazine (Volume III. Aug. 1899 - Jan. 1900) includes the two illustrations of Jubilee Cakes below, which are quite different to Gunter's creation. Unfortunately the author Walter St. John does not tell us who made these two impressive cakes.


Giant Jubilee Cakes are also a big thing this year. The contemporary London bakers Conditor and Cook are planning to assemble a massive portrait of Queen Elizabeth II out of hundreds of small blocks of gingerbread iced with varying flesh tones. This pixelated portrait will measure 94 square feet and contain over 3120 diamond shaped gingerbread blocks. It will be put together in Battersea Park on June 3rd. You will be able to buy one of its ginger flavoured diamonds for £1. Bettys of Harrogate have made a large, tiered cake based on designs submitted by Yorkshire school children, which is on its way to Buckingham Palace as I write.

Celebratory cakes associated with royal jubilees have been around since 1809, when small cakes were thrown from the Market Hall in Abingdon, Oxfordshire for the pleasure of the crowds whooping up the jubilee of George III. In a little book called Jubilee Jottings (London: 1887), the historian Thomas Preston gives us some details,

'In the evening several barrels of beer were set out in the Market Place for the poor, and Jubilee cakes in great number were thrown amongst the crowd from the top of the Market House, this being a repetition of a similar ceremony which took place at His Majesty's Accession in 1750. One of the cakes then scrambled for was exhibited by Mr. John Waite, a member of the corporation, who had carefully preserved it during the long period of close on half a century. This souvenir was considered of sufficient interest to be shown to the king.'

Jubilee cakes will be thrown again in Abingdon this June. If you visit the museum housed in the old Market Hall, you can see authentic examples from both Victoria's 1887 and 1897 jubilee celebrations. These ancient mummified cakes inform us that the Abingdon Jubilee Cakes were fairly commonplace current buns. They were washed down with plenty of beer.  Special beers were brewed for George III's Jubilee celebrations all over the country, an exercise I am pleased to say is being carried out again this year by a number of contemporary breweries. We learn from Preston that the brewers in Towcester, Hadley, Stoneleigh, Northampton and a few other towns, concocted a special commemorative ale, a 'two year old October' especially for the event. The 1809 celebrations were held on October 25th, so the brewers made a special version of their customary October Ale in 1807 and laid it down for two years to mature. Across the country, similar strong ales were doled out to the poor with an allowance of 'two quarts for a man, one quart for a woman, and half a pint for each child.' Preston also gives us some interesting statistics regarding the number of barrels brewed by the large London brewers in the year 1809-10, as a result of the celebrations a much greater quantity than usual.

Free buns also featured prominently at an open air party for children in Hyde Park during Queen Victoria's 1887 Jubilee, though by this time, the kiddies' half pint of beer had been replaced with ginger beer and lemonade. Another contemporary newspaper report in far off New Zealand offered some impressive statistics. 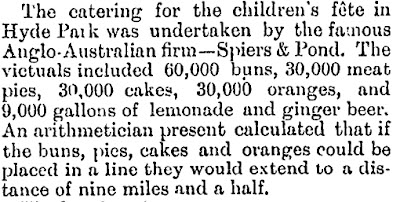 Jubilee buns like those hurled at Abingdon were plain current buns, while the cakes hidden under the giant Victorian fantasies were made of rich fruit cake. There are very few historical recipes for Jubilee Cake, but here is one Plumcake found which you might like to try.

Method: Mix the flour and baking powder well together; then rub in the lard till none can be found; add the fruit, sugar, and peel (cut into neat pieces), and mix thoroughly. Stir all well together with the milk, adding a little more if not sufficient to make a stiff batter. Divide into two cakes, and bake about two hours in well-greased tins. This cake is quite wholesome for children, who may eat quite a large piece without harm. I have used it 20 years. I never use currants, as they are very unwholesome for children, for they never digest. It is better to seed the raisins, as they are apt to cause irritation to the stomach of children. This cake may be made by leaving out the raisins and sultanas, adding four eggs instead, or a few seeds. ― W. A. BISHOP

From Favourite Cakes of Rural England, The Cable Series of Farm and Household Books No.2, 2nd ed. [1899] contributed by Country Housewives.


Perhaps the most fascinating story relating to a 1809 Jubilee dinner was the decision by the Corporation of London to forego their feast and donate the money to the liberation of debtors. They passed the following motion, 'That this Court is of opinion that it will be more acceptable to Almighty God, and more congenial to the paternal feelings of our beloved Sovereign, to promote the liberation of the prisoner and the captive on the joyful Jubilee about to be celebrated than in expending sums of money in feasting and illuminations; therefore do resolve that the sum of 1000l. be subscribed out of the City's cash to the Society for the Discharge of persons confined for debts in the prisons of this city.' However, the Lord Mayor was so pleased with this altruistic decision that he invited the Corporation to a light repast of cold beef in the  Mansion House at his own expense. He then changed his mind and informed them, 'Gentlemen! As hot beef is better than cold, if you please you shall have it hot.' The hot beef developed into a full meal and the Corporation enjoyed their feast after all, served on silver plate in the beautifully llluminated Egyptian Hall of the Mansion House.*


Read more on Jubilee dishes
Posted by Ivan Day at 16:27