Mr Davidson must have mistakenly assumed that the recipe had also appeared in the first edition of Dod's book in 1826. It did not. Plumcake, Food History Jottings' research assistant has searched through the many editions of this work to establish when the Bakewell Pudding recipe was first included. In her incredibly thorough way, she has examined the editions of 1826, 1827, 1829, 1833 and 1837 and still no recipe. The earliest occurrence she has found is in the edition of 1847. So the recipe above was published twenty one years later than Alan Davidson thought. If that is the case, when did the earliest known recipe for Bakewell Pudding really appear? Well, it might seem crazy, but for some time it seemed that the very first directions for making this traditional Derbyshire pudding had not after all been printed in Scotland, but in America! This was in The Family Magazine, a general knowledge collection published in Boston in 1837! This is the recipe,

An identical recipe was issued the same year in Philadelphia by the cookery writer Frances Harriet Green in The Housekeeper's Book. But surely, the earliest recipes for this iconic English pudding could not have  been published first on the other side of the Atlantic? No. There must have been an earlier English source. Well, last year Plumcake discovered the origin of these two recipes in an anonymous English publication called The Magazine of Domestic Economy, issued in London a year earlier in 1836. The two American magazines had copied it word for word. In the previous month's number the English magazine had promised to its readers 'Next month we shall give the far-famed Bakewell pudding.'' Its reputation was just about to become international. Other local legends claim that the pudding first appeared in the kitchen of the Rutland Arms in the 1820s, a chronology that makes slightly more sense than the nonsense quoted at the beginning of this post.

Line a dish with fine puff paste and spread over it a variety of preserves with strips of candied lemon peel. Then fill the dish with the following mixture -

Flavour with either bitter almonds, lemon, nutmeg or cinnamon. (These ingredients to be well mixed, but not beaten up). Bake in a moderate oven. When cold grate white sugar over pudding. A Mr. Stephen Blair gave £5 for this recipe at the hotel at Bakewell about 1835. From Traditional Fare of England and Wales. (London: 1948).

Unfortunately the WI book does not give a primary source for this most interesting recipe. In all the stories about Bakewell Pudding, the Rutland Arms Hotel or the inn that preceded it, the aforementioned White Horse are usually described as the birthplace of the dish. So most would assume that the hotel in Bakewell where Mr Blair bought his recipe was probably one of these. However, I own a manuscript receipt book dated 1835 which has three recipes, one of which names another local inn that seems to feature in the history of the pudding. I am publishing all three of these recipes here. The first recipe was given to the author of the manuscript by a Mrs Anthony of the Castle Hotel in Bakewell. In some ways it is very similar to the Stephen Blair recipe above, except the ingredients have been halved, though there are slightly less egg yolks in the mix. Here it is. 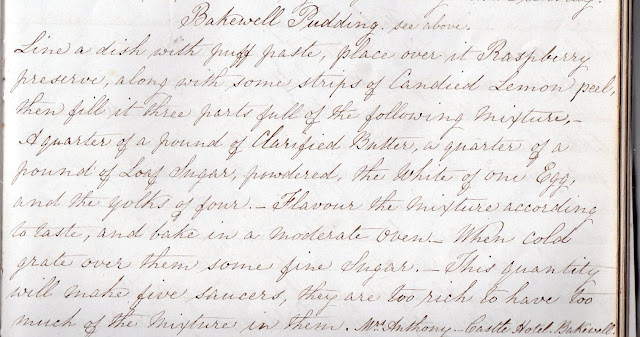 The 1835 edition of Pigot's Directory for Derbyshire tells us that the Castle was run at this time by a Mr Richard Anthony. Obviously Mrs Anthony was his wife. Her christian name was Hannah. The hotel, actually an inn,  is still extant and remains a popular local watering hole. Read the page below from the Directory and you will also notice The Rutland Arms, Market Place - proprietor Mr Greaves (the son of the famous Mrs Ann Greaves who is usually credited with first marketing the pudding). And also an inn called the White Horse on Gilliver Hill, a place name which no longer exists in the town. Though this is not the famous White Horse in Market Place which was replaced by the Rutland Arms. There were at one time two establishments called the White Horse in Bakewell. However, as can be seen from this document, the most important hotel of the town in Market Place in 1835 is trading as the Rutland Arms, not as the White Horse. For more information on Mrs Greaves and the local history of the pudding, an article written by Paul Hudson, Mrs Greaves' great-great-great-grandson is well worth reading. There is a link at the end of this post. I am indebted to Mr Hudson for generously sharing his considerable knowledge with me.

The manuscript in which the Castle Inn recipe is included was started in 1835, but this does not mean that the recipe dates from that year, as the book was an ongoing project which may not have been completed for some years. It seems to have been written by a Mrs Norton. But what is fascinating is that Mrs Anthony was living at the Castle Hotel in 1835 and probably baking her Bakewell puddings for her customers. She may also have been selling the recipe to those who were willing to part with the odd fiver. Here are the two other recipes. They are quite different. I have been unable to identify Mrs Pickslay, the authoress of the first one. 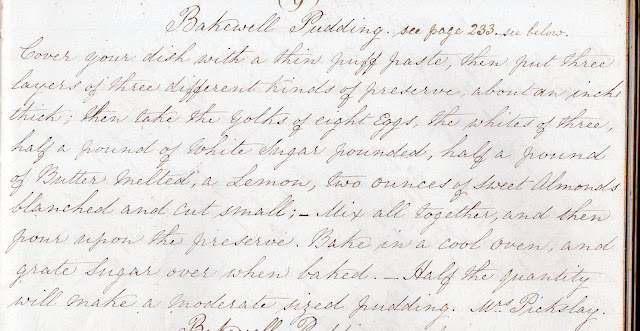 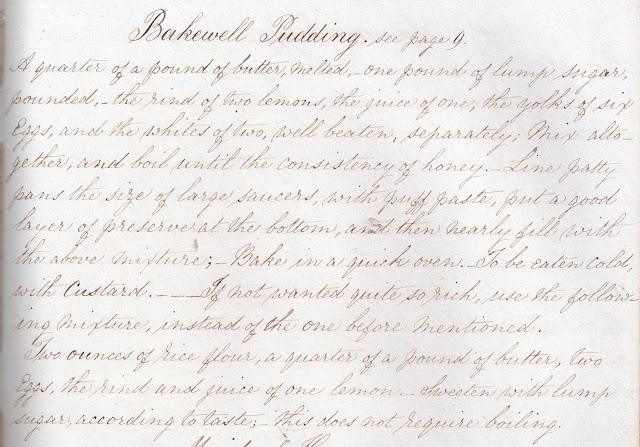 A manuscript recently acquired by Derbyshire Record Office contains a recipe which is very usefully dated 1837. It was compiled by Clara Palmer-Morewood of Alfreton Hall, Alfreton, Derbyshire. As you can see it is quite different to the recipe published in the previous year in The Magazine of Domestic Economy. Until someone locates the original source of the recipe said to have been purchased by Mr Blair in 1835, the magazine's recipe still remains the earliest to go into print. 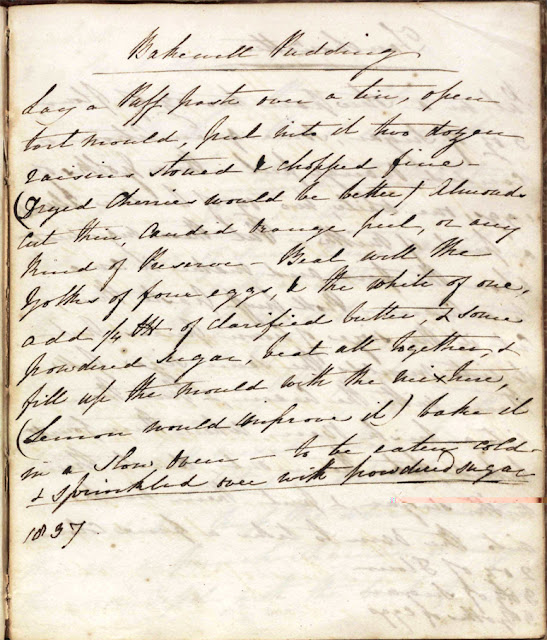 What is fascinating is that all these 1830s recipes for Bakewell Pudding are already quite different in character, making the whole question of authenticity rather elastic.