Both red and black grouse (the latter sometimes called black game or black cock) were extremely popular table birds with wealthy Victorian diners. Their dark gamey flesh was served up in a myriad ways, often in dishes with high-sounding French names - Black Game à la Montagnarde and Black Game à la suedoise were just two of a number of elaborate removes published in a chapter wholly devoted to these game birds in The Modern Cook (1846) by the great chef Charles Elmé Francatelli (1805-1876). Francatelli was chief cook and maître d'hôtel to Queen Victoria in 1841-2 and frequently dressed gélinotte d'Ecosse for her Majesty's table. At a royal dinner on 15th August 1841, Escalopes de Gélinottes aux Trûffes appeared among the entrées. Five days later he served spit roasted grouse to the queen among the rôts.

The more light heartedly named Grouse à la Rob Roy and Grouse à la Bonnie Lassie were invented by Francatelli's rival, the much better known chef Alexis Soyer (1809-1858). With their ring of Walter Scott and the Highlands, Soyer's grouse dishes reflected the contemporary fashion among the English aristocracy for all things Scottish. Soyer's signature grouse dish was a salad, which he invented in Paris at a culinary competition. It became so famous that a number of other cookery authors cited the recipe, usually quoting Soyer's own anecdote about its origin. For instance, in later editions of Meg Dod's The Cook's and Housewife's Manual (first published Edinburgh: 1826), the recipe and story were almost certainly included because of the dish's strong Scottish connections. In the 1862 edition of this iconic Scots cookery book, with its supposed connections to Sir Walter Scott, the editor paraphrases Soyer's own words,


'This salad, M. Soyer confesses, is better adapted to gentlemen than ladies. It was first served in Paris at a competition of the most celebrated artistes of the Stove, on whose head certain English noblemen and gentlemen had large bets. What cook can fail to envy the Chef of the Reform Club, when he is able to say, "My first course, being full of novelty, gained the approbation of the whole party;" but the salade created such an unexpected effect, that in brief the inventor was invited to the honour of the sitting, and over several rosades of exquisite Lafitte, it was christened by General Sir Alexander Duff, who presided over the noble party "SALADE DE GROUSE À LA SOYER!" These are moments which occur but once in a man's life. this was M. Soyer's Waterloo or Trafalgar; his Bridge of Lodi; his Austerlitz!'

General Sir Alexander Duff (1777-1853) was a younger son of the Scottish peer James Duff, the 4th Earl of Fife. After a distinguished military career, Alexander became Lord Lieutenant of Elginshire. Soyer was a shameless name dropper and was very proud that he had been invited to sit with Duff's noble party and share their Chateau Lafite. He gives his own account of the incident in The Gastronomic Regenerator (London: 1846) and explains in the recipe that, 'I must observe that the salad is better adapted for gentlemen than ladies, though if less eschalot were used it might also meet their approbation'. As well as the shallot, the salad dressing included chilli vinegar, so this was an ardently piquant dish - perfect for high ranking military officers pumped up with testosterone and mustard such as Duff and his companions. Soyer published two slightly different versions of the dish. The first, which appeared in The Gastronomic Regenerator was somewhat more ambitious than a slightly trimmed down incarnation he included in The Modern Housewife or Ménagère four years later. He illustrated the more complicated variation of the salad as below, which had two layers of quartered eggs in the garniture and a curious pointed dome topped with salad stuff, which he does not explain in the recipe.

These two books were aimed at different readerships. The Gastronomic Regenerator was intended for fellow professionals who catered for fairly elevated establishments, while The Modern Housewife  for middle class housewives and their cooks. The former's employers were likely to have their own grouse moor, the latter might get their birds from a game dealer.  Here is the simpler version of the recipe,

SALAD OF GAME
Boil eight eggs hard, shell  throw them into cold water, cut a thin slice off the bottom to facilitate the proper placing of them in the dish, cut each one into four, lengthwise, make a very thin flat border of butter about one inch from the edge of the dish you are going to serve them on; fix the pieces of egg upright, close to each other, the yolk outside, or alternately the white and yolk; you lay in the centre a layer of fresh salad that may be in season, and having previously roasted a young grouse rather underdone, which you cut into eight or ten pieces, then prepare sauce as follows : put a spoonful of eschalots, finely chopped, in a basin, one ditto of pounded sugar, the yolk of one egg, a teaspoonful of chopped parsley, tarragon, or chervil, and a quarter of an ounce of salt, mix in by degrees with a wooden spoon, four spoonfuls of oil and two of Chilli vinegar; when all mixed, put it on ice, or in a cold place; when ready to serve up, whip a gill of cream rather thick, which lightly mix with it, then lay the inferior parts of the grouse on the salad, sauce over so as to cover each piece, then lay over the salad and the remainder of the grouse; sauce over, and serve. The eggs may be ornamented with a little dot of radishes on the point, or beet-root. Anchovy and gherkin, cut into small diamonds, may be placed between, or cut gherkins in slices, and lay a border of them round, or in any way your fancy may dictate. Leaves of tarragon or chervil are very pretty round it.

From The Modern Housewife or Ménagère. London: 1849.

In October 1850 Soyer served the salad to Prince Albert at a magnificent banquet given by the Mayor of York in the city's Guild Hall. No doubt it was the more complicated version of the dish. Ten dishes of the salad were served among the entremets of the second course. Here is the full menu from Soyer's spurious history of food through the ages The Pantropheon (London: 1853). 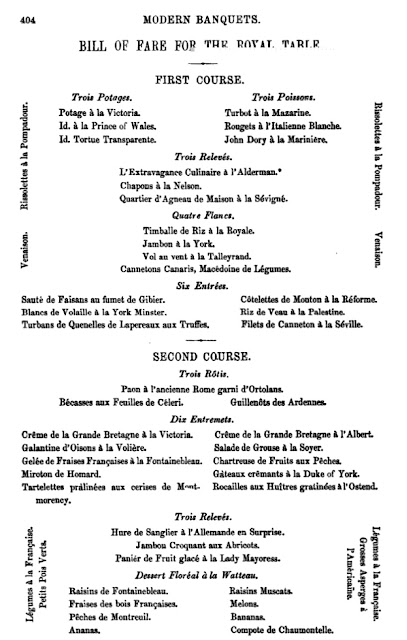 A few years ago I made Soyer's grouse salad at Castle Howard in Yorkshire in an episode of a very silly BBC2 television series called Royal Upstairs Downstairs. In September 1850 Victoria and Albert had been entertained by the Earl of Carlisle at this magnificent house and Soyer provided a spectacular ball supper. This particular episode in the twenty part series, which charted Victoria's visits to various stately homes, was meant to document this royal occasion. Unfortunately no menu has survived. I decided to make the grouse salad because it was served at the York feast a month later. If it was also served at Castle Howard, I wonder if Soyer made a version for the queen without the shallot and chilli vinegar. If so, I wonder if it met her 'approbation'?


For those of you who are wondering what on earth those bizarre heads are, here is Soyer’s shopping list of ingredients for the hundred-guinea dish. I will let you work it out yourself. Our sensibilities about what is acceptable on the plate in front of us have changed so much since 1850. As have our attitudes to the politics of food. Just consider that when Soyer prepared this absurd dish, the great famine was still raging in Ireland. 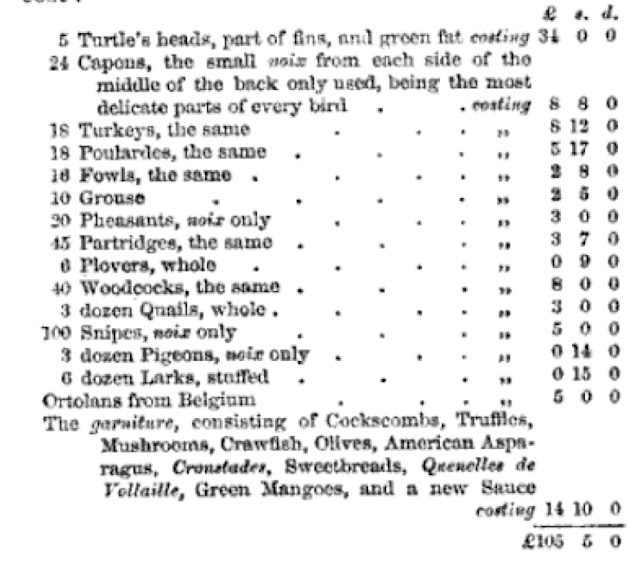