I recently had a conversation with a television producer about some of the joke recipes included at the beginning of the medieval cookery poem, the Liber cure cucorum (ca.1420). He wants me to make some of these well-known old howlers for a programme he is producing. The anonymous author suggests that, Yf þe coke be croked or sward mane, (if the cook be a crooked or froward man) it would be a real hoot to put some soap in his potage, with the result that his kitchen would be flooded by a mass of bubbling foam, much to the amusement of all.

Another of his practical jokes was to cover meat with dried hare's or kid's blood in order to make it appear raw to the diners, even though it had been cooked.

How somme mete schalle seme raw I teche;
Take harus blode, or kyddus ful fayre,
And dry hit in powder and kepe hit fro ayre;
When flesshe or fysshe his served wele hote,
Cast on þe powder of hare I wot;
Hit is so frym, ren hyt wylle
An malt as sugar, by ry3t good skylle
And make þo flesshe to seme, iwys,
As hit were raw, and 3yt hit nys.

Food could also be tainted with fake maggots by strewing it with short pieces of gut harp strings, no doubt causing a considerable amount of mirth in the great hall, at least among the adolescents in the company,

Well I suppose they did not have Channel 4 in the fifteenth century, so bumper wheezes and wizard japes like this were perhaps designed to add a touch of fun to a feast. Despite all the clichés to the contrary, high status medieval dinners were heavily ritualised and rather stiff, so a bit of slapstick and buffoonery would have made for a slightly less formal ambience. The best known joke dish of the medieval period was the cockatrice. To prepare one of these the cook had to attach the derriere of a pig to the front end of a cockerel. I suppose the result was meant to resemble those mythical beasts that one comes across carved on miserichords in cathedral choir stalls, or in the marginal illuminations of medieval psalters. However, on the few occasions that I have attempted a cockatrice, it resembled nothing more than a pig's bum sewn on to a sad looking dead cockerel's head - not a terribly appetising prospect, nor in the slightest bit funny.

Some marginally better food jokes appeared a little later. Sir Hugh Platt in Delights for Ladies (1600) explains how to make an entire fake meal of roast rabbits, poultry and game birds out of a sort of moulded blancmange. They were even 'dredged' with breadcrumbs 'so they will seem as if they were roasted and breaded'. At least these required a degree of skill. Here is the full text of Platt's directions, 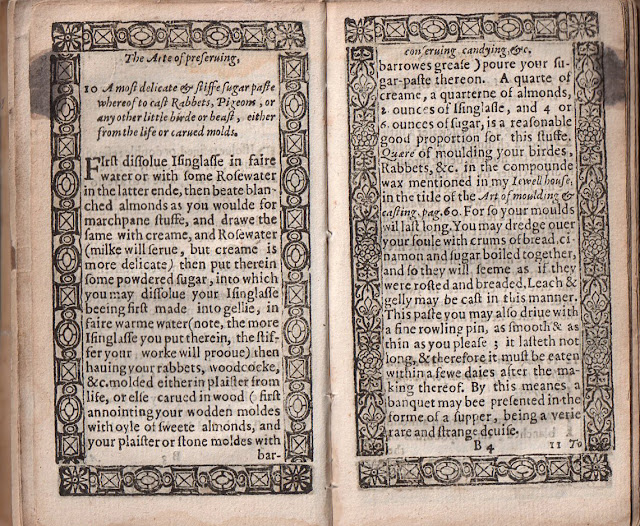 Sixty years later, Robert May offers us a few more comedic dishes, including a complex bride pie in which is concealed 'live birds, or a snake, which will seem strange to the beholders, which cut up the pie at the Table.' He goes on to comment 'this is only for a Wedding to pass away the time.'  Perhaps the pie was cut up and the snake released during a particularly boring best man's speech in order to cause a diversion. But the most legendary of all May's gastronomic drolleries was the remarkable piece of Stuart performance art outlined below. Sorry about the seventeenth century custard pie stain on my copy.

With its leaping frogs and ladies throwing eggshells full of sweet waters at each other, May's 'Triumphs and Trophies in Cookery' was a lively Jacobean equivalent of a Brian Rix bedroom farce, but it could not compete with the culinary slapstick humour of the Italian peninsula. Take the image of the triumphal arch below, entirely made of cheeses, hams and sausages, with two roast pigs squirting wine from the spouts in their mouths on to anyone foolish enough to walk below. This was constructed for a coccagna festival in Naples in 1629. At the end of the festivities, all the food in the arch was up for grabs, so the poor of the city demolished it, fighting each other fiercely in order to get their share.

Coccagna festivals were held in many Italian cities and in some other European countries, but the best ones took place in Naples. They had their origins in the pan-European myth of the Land of Coccagna (usually spelt Cockagne in English), where money and food grew on trees, rivers flowed with wine and if you worked you went to prison. With its promise of unimaginable plentitude, this fable gave a vain hope of a better life to the undernourished and overworked peasantry of Europe. The massive machine della coccagna erected in the royal square were usually paid for by the king of Naples. They were entirely made of food materials and were ransacked by the poor of the city as soon as the king gave a signal.

The pavilion on the hill in the image below is made of cake and bread, the fountains flow with wine and the formal garden in the foreground is constructed from hams and cheeses. The animals grazing on the hillside have been roasted and then put back in their own skins. The Neapolitan citizens are ready to rush in from the sides to ransack the whole structure and take advantage of the king's generosity. I was privileged enough to have been involved in an exhibition about a decade ago at the Getty Research Institute in Los Angeles entitled The Edible Monument, which was devoted to the coccagne and other European culinary curiosities. If you want to find out more about this extraordinary backwater of food culture, visit the exhibition website from the link at the end of this posting.
Neapolitans were also pretty good at making the kind of fake food that Sir Hugh Platt describes above. In the 1780s King Ferdinand IV of Naples and his queen Maria Carolina visited the convent complex of San Gregorio Armeno. The English travel writer Dr George Moore happened to be at the convent for the occasion and gave a very detailed account of the visit in his book A View of Society and Manners in Italy (London: 1790). He tells of a remarkable meal the sisters of the convent gave to the King and Queen. Although this sumptuous repast appeared to consist of a variety of fish, flesh and fowl, all the dishes were made entirely of moulded ice creams and water ices, a Neapolitan speciality. 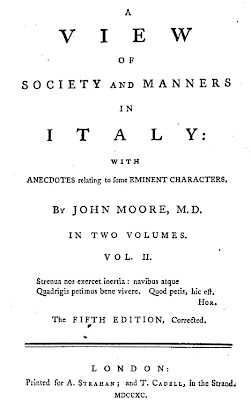 Here is Moore's account of the remarkable frosty feast prepared by the nuns. 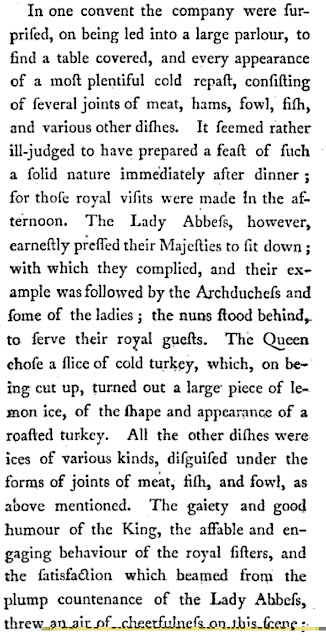 These novelty moulded ices could be pretty convincing. Here is a one of a bunch of grapes I made just a few days ago. It was moulded from muscadine water ice, a lemon water ice flavoured with elderflower and coloured with red grape juice. 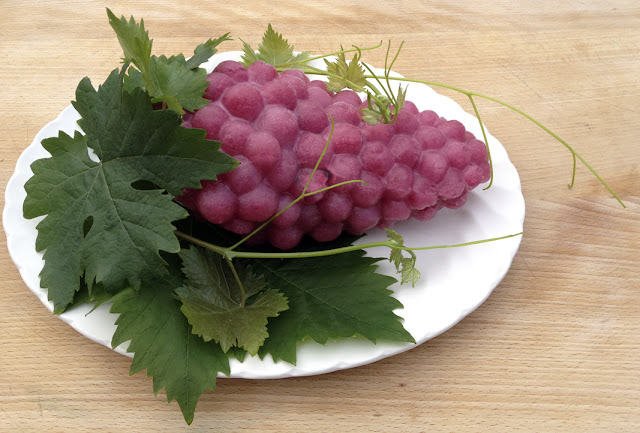 When Charles V visited the convent of Martarana in Palermo in June 1537, the fruit trees in the garden were bare, so the nuns hung them with fake oranges made of marzipan in order to impress the emperor - or so the story goes. Fake fruits of this kind were actually once made all over Europe. A few years ago I dressed a remarkable 1766 Sèvres dessert service which had been given as a gift by Louis XV to his minister the Marquess of Choiseul. I filled two extraordinary decorated flower baskets with trompe-l'œil marzipan fruit which I made in the manner of the day. Two very rare white biscuit Sèvres flower baskets needed artificial flowers, so I obliged with two bouquets entirely made from sugar.

This tradition of making novelty foods out of sugar paste has a long history. In the Renaissance, plates and cups formed of sugar paste were used for serving food and drink. At the end of the meal, they too could be eaten, elegantly saving the problem of the washing up. Many novelty items were made from this material, a blend of powdered sugar, gum tragacanth and rosewater. Complete chess sets and playing cards are just a few of the fun items that graced the Tudor banquet table. Curiously in the eighteenth century, floppy cribbage cards were made out of flummery or blancmange, like those made below from a recipe in Elizabeth Raffald's The Experienced English Housekeeper (Manchester: 1769). In the nineteenth century the New York based ice cream mould manufacturers Eppelsheimers retailed a set of pewter moulds to make a complete pack of ice cream playing cards. 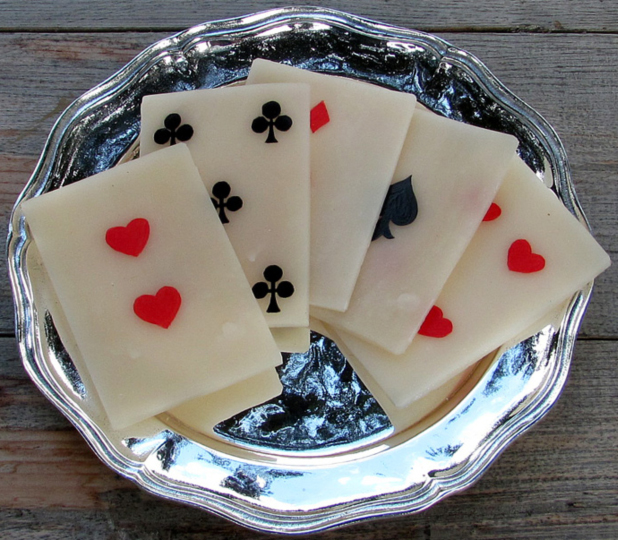 This ability of joke food to switch from one medium to another is best exemplified in the examples illustrated below. The cockerel and hen in the top left hand corner date from 1621 and represent two folded napkins, no doubt intended for an all male gathering. The black and white image beneath it, shows the same joke nearly three hundred years later as a representation of an ice cream mould in an early twentieth century catalogue. The sugar or chocolate mould on the right dates from the late nineteenth century and is the one I used to make the chocolate Chanticleer covering his mate towards the beginning of this post. I guess the old ones are definitely the best ones. 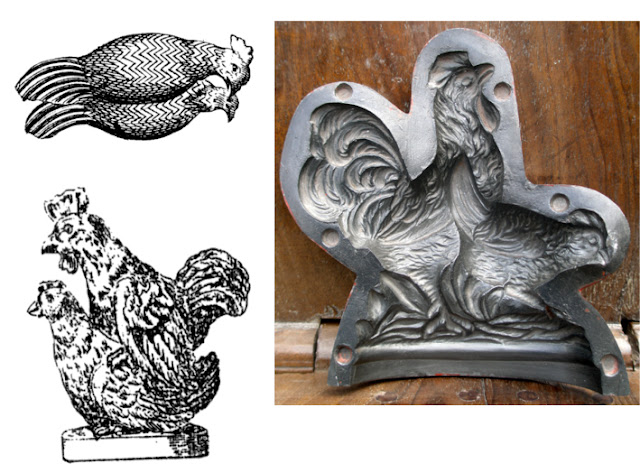 There are a number of accounts of Italian Renaissance feasts where a table appears in the dining room as if by magic and after one course is eaten suddenly vanishes, only to appear again laden with a fresh batch of dishes. This of course was one practical joke which depended on sophisticated and ingenious mechanics. As far as I know, none of these extraordinary tables have survived in Italy.* However, there is one that is still extant in a banqueting house dating from 1692, known as the Bellaria, in the gardens of Český Krumlov castle in Bohemia. The baroque kitchen and table date from 1746. Next year I will be staging my first Bohemian baroque meal at the Prague Carnivale with my remarkable artist friends Rostislav and Zlatuše Müller, who were responsible for reviving the event. It will take place in the Clam Gallas Palace in Prague in February, but another year we are planning to use the magic table at Český Krumlov to recreate a multi-course baroque dinner. So if you like historical practical jokes of this kind do watch this space.

* I have just heard from Marina Revelant, a follower of this blog from Italy, who has pointed out to me that an Italian magic table has survived in the beautiful Palazzina Cinese in the Parco della Favorita in Palermo in Sicilia. Marina has kindly sent me the photograph below of this lovely casina, which was designed by Guiseppe Venanzio Marvuglia (1729-1814) for Ferdinand I of the Two Sicilies. It is known as ll tavola matematica and is very similar in every way to the one in Český Krumlov. I have visited Palermo three times, but did not know about this. So thank you very much Marina for getting in touch with this great information.

The Edible Monument
Posted by Ivan Day at 16:51