An Aenigmatical Bill of Fare 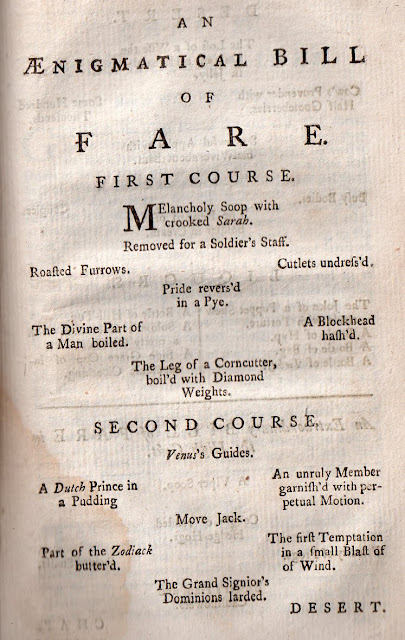 In a May 2011 posting on her marvellous blog Homo Gastronomicus, India Mandelkern transcribed some very unusual royal Christmas menus from the time of George II which are recorded in a manuscript in the British Library - MSS 15956. The various dishes on these menus are in the form of riddles, some of them rather difficult to fathom out for modern readers. For instance 'A sign in the Zodiac butter'd' would be the popular Georgian dish buttered crabs, while 'The divine part of Mortals fry'd' is obviously fried sole. These however are the easy ones. If you want to spend your Christmas figuring out the other dishes I suggest you take a look at India's posting.

But before you do, I am going to offer you another bill of fare comprising of riddle dishes along the very same lines, which was published in the anonymous The Ladies Companion (London: 1751) fifth edition with large additions, Vol. II pp. 393-4. This book has an interesting publication history. It started life in 1737 with the title The Whole Duty of a Woman. In 1740, a second edition was issued with the new title The Lady's Companion and it went through a series of editions, until a very much augmented two volume fifth edition appeared in 1751, which contains 'An Aenigmatical Bill of Fare'. The manuscript bills of fare which India has transcribed date from Christmas 1755 and I have always suspected that they were inspired by An Aenigmatical Bill of Fare published four years earlier. Some of the dishes in the BL manuscript are identical, such as 'The Grand Signior's Dominions larded', which is of course larded turkey. Appended to the Aenigmatical Bill of Fare is another joke menu, this time in the 'High Goút', not so much a collection of riddles, but more a schoolboy joke with a slightly anti-French slant. Although The Lady's Companion is very much a publisher's compilation, the fifth ediiton is one of the most useful of all texts to those of us seriously studying the cookery of the eighteenth century. Its 'upward of three thousand recipes' were largely borrowed from earlier texts, but it is a well organised  encyclopaedic compendium of Georgian cookery on a very ambitious scale. It is also illustrated with woodcuts (lifted from Richard Bradley) of trussing methods and engravings of pie and pastry designs (lifted from Edward Kidder). Hannah Glasse probably owned a copy of its earliest incarnation The Whole Duty of a Woman (London; 1737) from which she made very large borrowings in The Art of Cookery Made Plain and Easy (London: 1747).

If any of you can figure out the dishes and liquors on these pages please let me know how you get on and please, please don't also miss to have a go at those on India's post The King's Feast.
My next post will also be on the subject of unusual eighteenth century bills of fare. 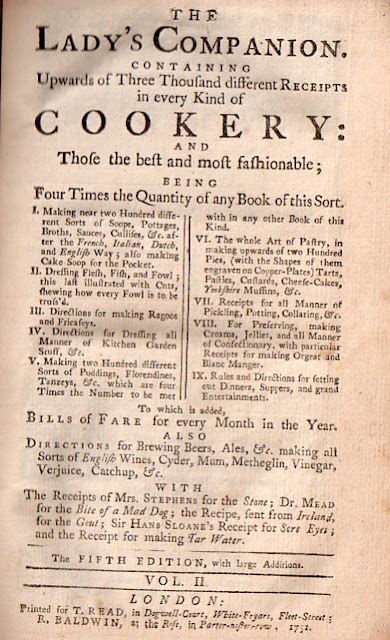 Email ThisBlogThis!Share to TwitterShare to FacebookShare to Pinterest
Labels: An Aenigmatical Bill of Fare, Bill of Fare