From Jardiniere to Satyr Pie

New insights into Britain's extraordinary culinary history sometimes turn up in quite unexpected ways. A few weeks ago a great friend of mine, the sharp eyed Michael Finlay, a fellow Cumbrian with a lifetime's experience of dealing and collecting fine antiques, turned up at my house with an object he had just purchased. The vendor had described it as a Victorian jardiniere. This handsome looking copper vessel did indeed look like it may once have been given pride of place on a window sill, perhaps with a large aspidistra growing out of it. But careful scrutiny of its structure alerted the ever watchful Michael to the fact that it was not what it seemed.

Michael is a truly remarkable man. Over the years he has put together many major specialist collections of antique objects. These include bronze bell mortars, writing equipment and mining tokens. Once he has built up a large and representative assemblage, he then usually writes the authoritative book on the subject and sells the collection to finance his next interest. His remarkable book Western Writing Implements: In the Age of the Quill Pen won the Daily Telegraph book of the year award and now changes hands for hundreds of pounds. In the last few years he has turned his attention to collecting culinary antiques, an interest for which he blames me. In a very short time he has put together a museum style collection of the very highest quality. For instance in just one year he has assembled a truly extraordinary collection of pastry jagging irons, including wonderful rare examples dating from the renaissance through to the nineteenth century. They will form the subject of his next book, which is already taking shape. Michael has just launched a marvellous new website. There is a link at the end of this post.

However, let's return to his copper jardiniere. Michael thought that it had a very close resemblance to a nineteenth century pie mould. He should know, because he has some very nice examples himself and has spent many fruitful hours in my kitchen making pies with them. He was pretty sure he was right, but wanted confirmation from me. From the very moment I first saw it, I knew it had indeed once been a large copper pie mould, but had been subjected to a conversion probably at about the time of the First World War. Its once separate sections had been brazed together and a couple of brass handles attached. It was in fact one of the most unusual pie forms I have ever seen and certainly the most handsome. As you can see from the photograph, it is ornamented with the grimacing head of a horned satyr, perhaps intended to be old Pan himself. What a pie it must have made! A very interesting detail was an engraved ownership mark, an Italianate capital H surmounted by an earl's coronet. 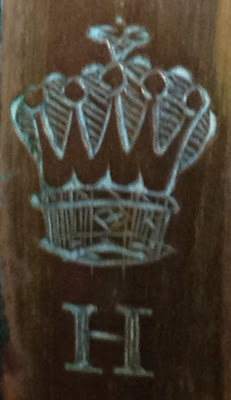 Marks of this kind are often seen on items of batterie de cuisine out of great house kitchens and this particular one was very familiar to me as I had worked many times in the historic kitchen in Harewood House near Leeds, where many items are engraved with an identical symbol. However, there were also earls of Huntingdon, Halifax and Harrington, so the jury is still out as to which noble kitchen it originally came from. But I suspect it is from Harewood. How it came to be turned into a plant pot is a mystery. 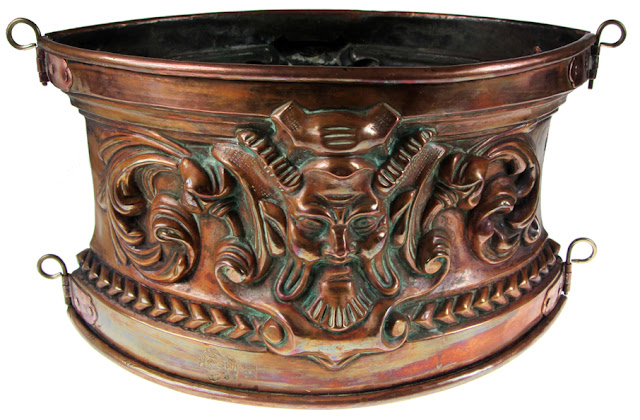 Michael took the jardiniere to a metalworking friend who skilfully converted it back to a pie mould.Yesterday, we both had a great baking session and used it to make a pie, the first time it had been used for that purpose for at least a hundred years. The problem now is how do I find a butcher who can provide me with satyr meat to make the filling?