Eat the Entire Creation if you dare ....

...but Beware of the Fatal Effects of Gluttony

I have often thought that if the great biblical deluge had taken place in the eighteenth century and Noah had been an Englishman, all those creatures which God placed in his care would never have survived. They would have all been devoured by Mr and Mrs Noah and all the little Noahs before they even had a chance to go forth and multiply and fill the four corners of the earth. Eighteenth century English diners were serial carnivores and I sometimes think it was their gastronomic ambition to gnaw their way through the entire creation. Just look at this pie baked in 1763 in the kitchen of a long vanished country house close to where I live in the English Lake District.

If you find the handwriting a bit difficult, here is a transcript.

This makes the heroic Yorkshire Christmas Pies of the period with their fillings of boned turkey, goose and other poultry seem positively parsimonious. The ecological consequences of a pie filled with the fruits of a mass slaughter on this scale must have been severe. I don't suppose much bird song was heard in the Lowther Valley for some months.

But if you really wanted to munch your way through the entire avian population (with a few leverets and baby rabbits thrown in for good measure), why not do it in a more organised way and hold a dinner four times a year to regale your guests with just those birds that are in season. Here are four bills of fare offered by Charles Carter in his rare and much neglected The Compleat City and Country Cook (London: 1732). The ornithologists among you will have fun ticking off the various species on offer here against the twitcher's bible - The British List:A Checklist of Birds of Britain. Not quite all the birds of the air, but still a pretty impressive assemblage and a lot more generous than that modern emblem of plentitude, the 'family bucket'. 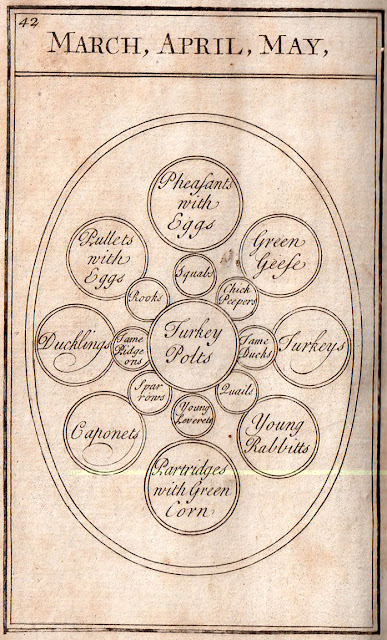 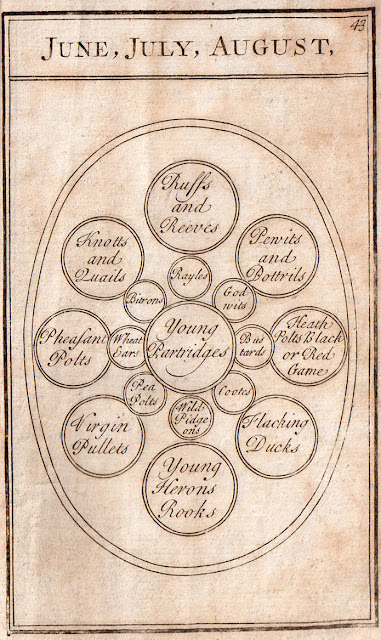 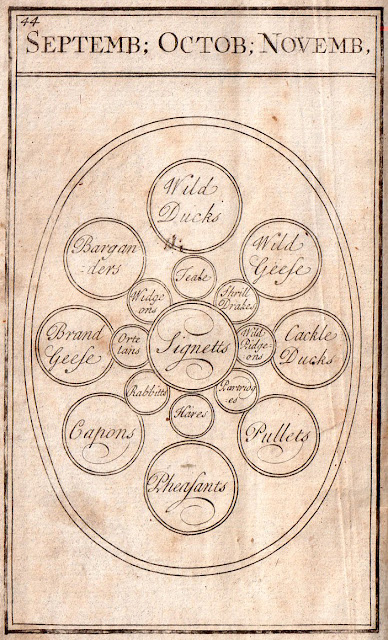 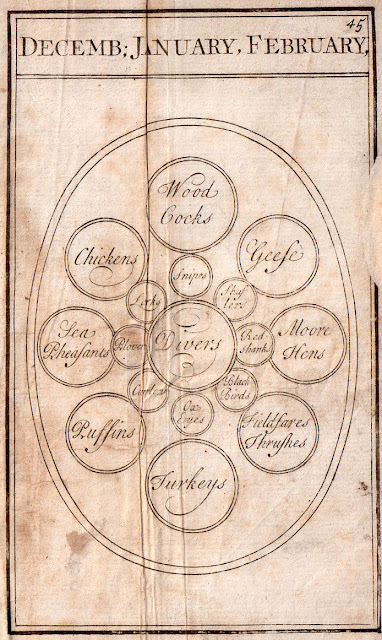 I think this justifies my claim that we English were dedicated carnivores, though you must understand that a lot of the birds served up at these dinners, such as the chick peepers, green geese, turkey polts, pheasant polts, squabs etc, are baby chicks, barely just sprouting their juvenile feathers. So as well as enthusiastic zoophagists, we also regularly committed serial infanticide. Unlike his modern equivalent, the Georgian diner had no sentimental barriers to eating babies - they tasted better and were more tender than adults. So what was the problem with a massacre of the innocents? 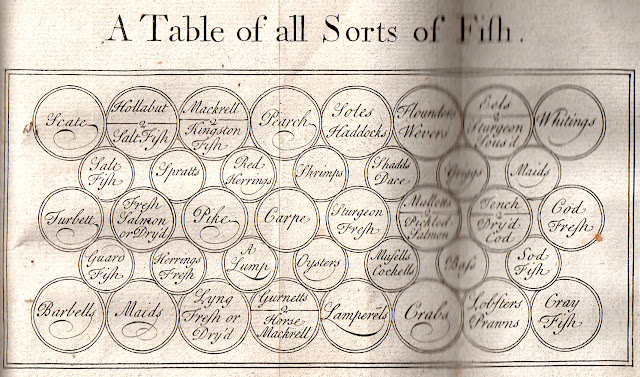 Ever since the medieval period some classes of Englishmen have liked plenty of variety on the table in front of them. Fear of mass extinctions did not cross their minds. This was particulary true at the great livery company feasts in the City of London. The poet Edward Hake, writing in 1579 in his Newes out of St Powles Churchyard describes the variety of birds served at one of these occasions. 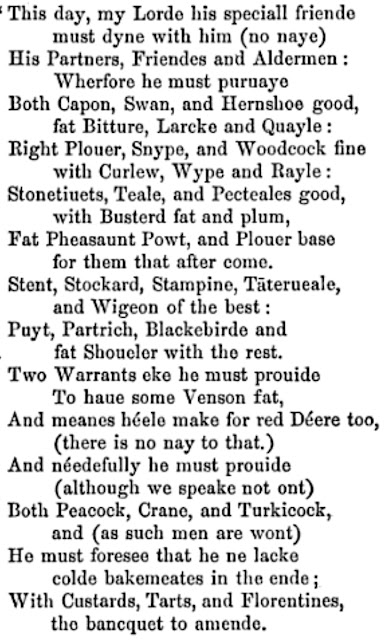 The keen bird watchers among you (and thanks to all those who helped me identify water dab as the little grebe) should have fun identifying some of these creatures from their Tudor names. Well over a decade ago I created a table at the Museum of London based on a feast book for the Grocers' Company from 1566. Here is the table, an avian disaster zone if ever I saw one. 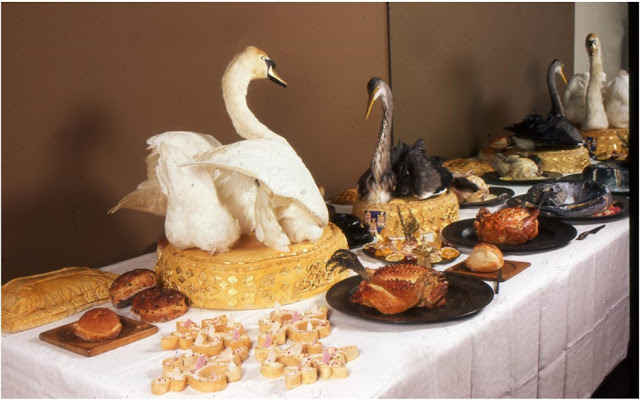 I am a fairly committed carnivore myself, but this kind of excess has always troubled me. I am no anthropologist, but I suspect 'heroic' eating on this grand scale must have grown out of male hunting culture. In the seventeenth and eighteenth centuries one of the most conspicuous dishes of the baroque feast was the olio, a mixed meat stew of Spanish origin which was enjoyed on high status tables all over Europe. It was an edible expression of the extent of the aristocratic host's estates and game parks. Remember aristocratic gentlemen of this period had two main hobbies - hunting and warfare. They did n't usually eat their human enemies, but they often consumed the spoils of the chase on an enormous scale. John Nott, master cook to the Duke of Bolton, tells us in the introduction to The Cook's and Confectioner's Dictionary (London: 1723) that 'this happy Island of Great Britain, which like another Canaan, may properly enough be call'd, a Land flowing with Milk and Honey, so richly is it stor'd with Fish, Flesh and Fowl.' Later in his book he gives the following recipe to make an olio. After he had prepared this gargantuan dish for his noble lord, you might well wonder that even if the nation's rivers of milk and honey still continued to flow, its abundant supplies of flesh and fowl probably became seriously depleted. 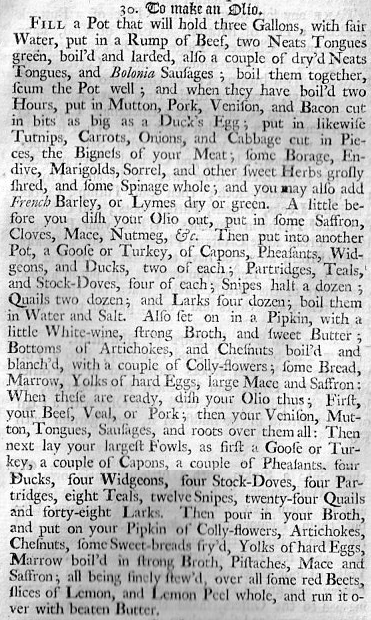 Well I hope that one day all those birds and fish and creatures consumed in olios, city feasts and other orgiastic mass extinctions eventually got their own back. Just recently I acquired a lovely copy of my favourite image of the joys of the revenge of the eaten on the eater. Based on Henry Fuseli's celebrated painting The Nightmare, this marvellous satyrical lithograph by MG (1830), shows Lord Mayor John Key being attacked by the creatures that should have made up his Lord Mayor's feast the previous evening, but for political reasons the feast was cancelled by the king. This image was first brought to my attention by my dear friend Gillian Riley when we worked together in 2000 on the exhibiton Eat, Drink and be Merry. It became the banner image of the exhibition so I am so pleased after all these years to have found a nice copy to hang in my own study. I will let the creatures of Key's abortive feast have the last word and I truly hope that that huge green turtle snogging my Lord Mayor has been nursing a really chronic case of halitosis on his long sea voyage from the Caribbean. 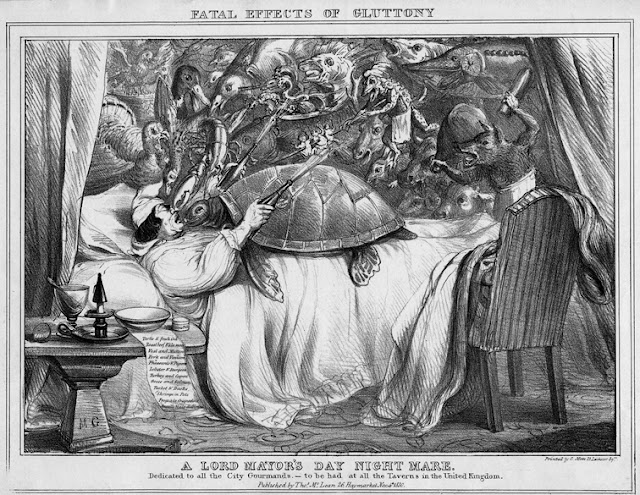 However, there is an interesting American coda to this story of carnivorous excess. I passed through O'Hare airport in Chicago a few days ago on my way home from the Twin Cities. While I 'enjoyed' (wrong word) a modest, but pretty awful quasi-Chinese lunch in Manchu Wok in the airport food mall while waiting for my connection to the UK, I contemplated on one of the most extreme dîners à l'arche de Noé ever, served up in the Windy City in 1893.
This edible ecological disaster, almost on the same scale as the mass exterminations of the Great Plains bison, was served to six hundred guests at the Grand Pacific Hotel in February 1893. This was the transatlantic incarnation of the baroque olio, but on an even more horrific scale. It is the culinary equivalent of one of those Victorian natural history museums, stuffed full of stuffed specimens in glass cases, the chief difference being that the diners in the Grand Pacific Hotel stuffed the specimens into themselves. The sheer logistics of hunting these unfortunate 'critturs', let alone skinning and plucking them, cooking them in a Victorian kitchen and finally serving them up with their complex garnishes to six hundred salivating Illinois huntsman is just mind-bogling. And did all six hundred manage to get a portion from the Pyramid of Wild Goose Livers? A wild goose only has one liver. Right? The manager and host of this grand event was called Mr. John Drake. With a name like that I thought he might have had a bit more sympathy with his feathered friends - and furry ones too - check out the black bear, cinnamon bear, opossum, racoon etc. among the roasts. But not a bit of it, in 1883 these annual 'eat all you can of God's creation for $9' indulgences had been going on for thirty-seven years! The 1883 bash was the very last. Drake died in 1895. I wonder if both he and Lord Mayor Key are still being tormented in their own personal circle of Hades by the angry souls of all those sturgeons, turtles, prairie chickens, fox squirrels, butter-ball ducks and cinnamon bears they devoured during their lives. Merry Christmas everyone!