If one nation's cuisine is ridiculed in modern times even more than England's, it is that of its close neighbour Scotland. It is unfortunately true that visitors to this beautiful country can frequently experience some pretty basic catering. The city of Glasgow is even described in cliché terms as 'the heart attack capital' of Europe because it is perceived that its inhabitants have a preference for fatty, unhealthy food. I myself have eaten some awful food there, but to be fair in recent years have also had some of the very best in Britain in its excellent restaurants. Despite stereotypical perceptions of its contemporary food scene, Scotland does have an extraordinary culinary heritage. But some of its truly great dishes may not be known to you because they became extinct a very long time.

Among these forgotten delights is one which I rank as one of my all-time-favourite foods, so much-loved that I would prefer a single forkful of this humble dish any day to an all-expenses-paid night out with the full tasting menu at El Bulli or The Fat Duck. Sorry Signor Adria and Mr Blumenthal, but this homely Scottish dish was designed not by some culinary high priest like your good selves, but by a forgotten Caledonian cook who was truly inspired by the angels. He or (more likely she) really understood that the best food is simply the simplest. I make this dish regularly on my period cookery courses and a growing number of people feel the same way that I do about it. A common reaction on trying it is, 'That is definitely the best thing I have ever tasted!' My clients come from all over the world - Australia, New Zealand, the United States, Canada, Japan and Europe. All who have experienced this dish have been truly amazed. Even the faces of my very-hard-to please Italian and French guests light up and take on an expression of euphoria on savouring the first mouthful! So Viva Caledonia!

So what you may ask is the identity of this ambrosial delight from the misty glens?' Well, it is a dish made from that lowly favourite of all Celts, the humble potato. The earliest printed recipe appeared in 1773 in the first edition of a little book called Cookery and Pastry by a Mrs Susannah Maciver, who ran a cookery school in the city of Edinburgh, though the dish is probably much older. The method of cooking which Mrs Maciver advocated is the reason why the dish is now extinct (except in my house of course). It was 'fired' below a joint of meat rotating on a spit in front of the fire, a technique no longer possible in the vast majority of modern kitchens. The same process was commonly once used for cooking other puddings, the best known being the famous Yorkshire pudding, which was originally baked in front of the fire below a joint rather than in the oven. This was how roast potatoes were also originally cooked. Here is Mrs Maciver's recipe - 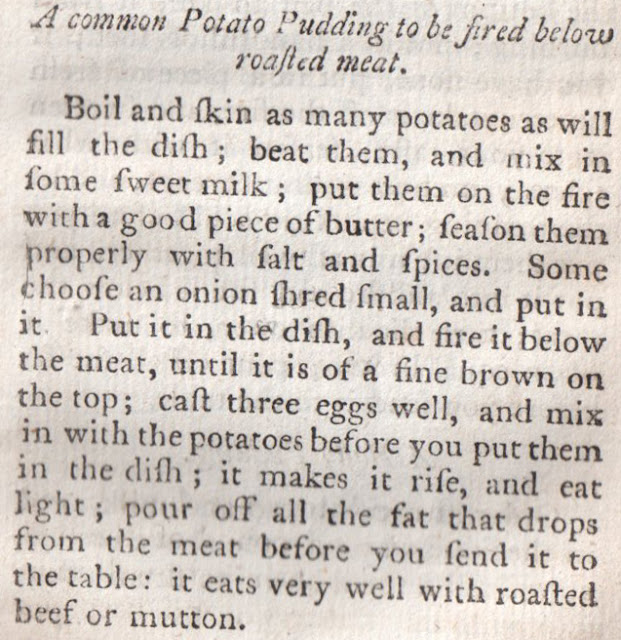 I follow her instructions pretty closely, using a generous amount of butter and plenty of seasoning in the form of a good amount of salt, black pepper and a little nutmeg. 'Plain' dishes of this kind from Scotland were always highly seasoned - think of mealy puddings, white pudding and haggis, which are all very spicy. Adding the finely chopped raw onion to the mash makes all the difference.

Although Maciver tells us we can cook it under beef or mutton, I prefer to 'fire' the pudding under a leg or shoulder of mutton - don't use lamb. I usually put the joint in front of the fire for about an hour before I place the pudding underneath. This ensures that much of the fat is shed by the joint into the dripping pan before the pudding joins it in front of the fire. Although a little fat continues to drip onto the surface of the pudding,  gravy starts to weep from the joint, coating the potato with an umami-rich crust which browns in the intense heat of the fire. It is this which gives the dish its unique quality. The crisp, meaty, toasted skin sits above a light and surprisingly creamy potato puree. The bad news is that it is absolutely impossible to get the same effect in an oven. You really do need access to a spit, a dripping pan and an open fire. Sorry. There are a very large number of period recipes which just cannot be recreated in their full glory unless you use the right kit. That it is called a 'common Potato Pudding" indicates that this lovely dish must once have been widespread and frequently cooked.

In 1791 a small collection of recipes by a Mrs Frazer, called The Practice of Cookery, Pastry, Confectionery, Pickling, Preserving &c. was published in Edinburgh. The title page of the first edition declared that Mrs Frazer was the 'Sole Teacher of these Arts in Edinburgh, Several years Colleague, and afterwards Successor to Mrs McIver deceased.' Mrs Frazer's book is based on that of her old cookery school colleague and she includes the recipe for the potato pudding with slighly different wording. I actually prefer Mrs Frazer's version because she gives you the choice of including eggs in the mix. Personally I think it is a much better dish without them.


As I mentioned earlier this 'potato pudding for firing under meat' is just one of a number of puddings that were once prepared in this manner. Maciver also gives a recipe for a 'bread pudding to be fired under meat' - see below. I have made this a few times, but found it a bit heavy. Unlike the potato pudding it is sweetened, but like boiled plum pudding was designed to be served with the meat rather than as a sweet dish in its own right.

One of the more unusual of the fired puddings is a type of herb pudding or tansy that was also baked in a pan under meat. Mrs Maciver gives us a recipe for this dish,though an earlier one was included by another Scottish Enlightenment cook,  Elizabeth Cleland in A New and Easier Method of Cookery published in Edinburgh in 1755. A tansy was a strongly aromatic and somewhat bitter dish eaten in the springtime all over Britain. Most tansies were simply fried in a pan, but this one could be done in 'the dripping pan under roasted meat'. They were often coloured green with spinach juice and flavoured with the bitter juice of the pungent herb tansy. Here is Clelands's recipe, 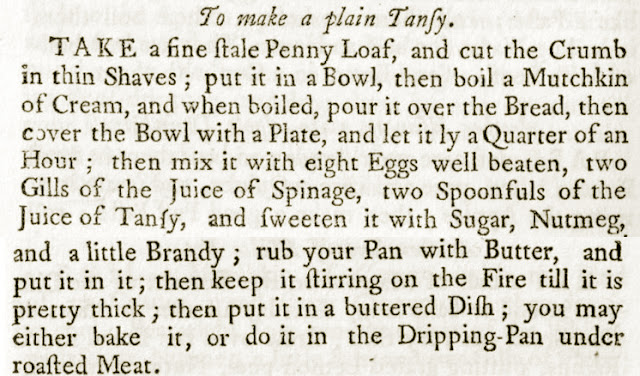 A recipe for a much simpler kind of fired pudding was published in a cookery book in the Scottish Border town of Berwick-upon-Tweed by a local printer and bookseller Robert Taylor in 1769. The author of this work, The Lady's, Housewife's, and Cooksmaid's Assistant: or, The Art of Cookery was his wife Elizabeth Taylor - well at least her name appears on the title page. In reality, Robert Taylor had been sued for breach of copyright by the London bookseller Andrew Millar, who owned the right to publish the works of the deceased poet James Thompson. In 1769 Taylor had issued a pirated edition of Thompson's work The Seasons. As a result of this law suit, which actually made copyright law history, Taylor needed some hard cash and raised money by putting out subscriptions among the local merchants and landed class of Berwick for a new cookery book with his wife as author. For a man who had just been found guilty of  breach of copyright, it is ironic that he stole much of the content for his new book from Hannah Glasse's 1747 The Art of Cookery!

Glasse had included a recipe for Yorkshire Pudding in her book, the first in an English collection to be given this specific regional name, though an almost identical one published in another book in 1737, which she may have used as her source, was simply called A Dripping Pudding. Elizabeth Taylor's 1769 recipe is similar to both, but is not an exact copy of either. It is interesting that it occurs in a Scottish context, a country where more recipes for fired puddings were appearing in the culinary literature than in English cookery books. Here is Elizabeth's recipe, a Yorkshire Pudding in all but name, 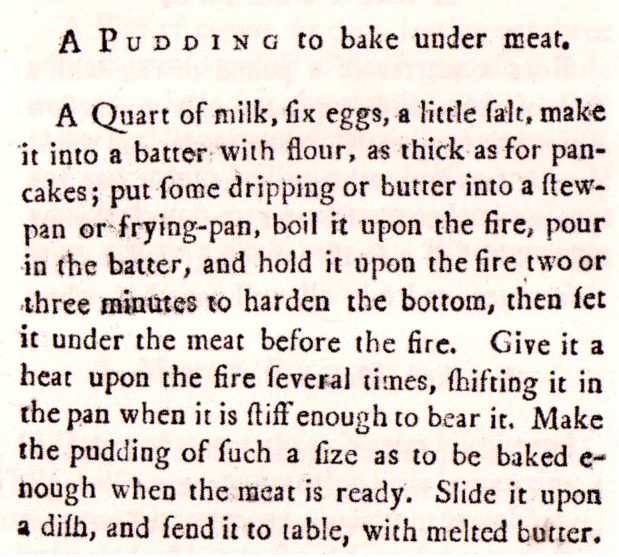 The earliest English recipe for a pudding to be cooked under meat appeared in The Whole Duty of a Woman, an anonymous collection of recipes published in London in 1737. I have posted a link at the end of this article to a video on Youtube which shows me making this dish. Here is the recipe,

Make a good Batter as for Pancakes, put it in a hot Toss-pan over the Fire with a Bit of Butter to fry the Bottom a little, then put the Pan and Batter under a Shoulder of Mutton instcad of a Dripping-pan, keeping frequently shaking it by the Handle and it will be light and savoury, - and fit to take up when your Mutton is enough; then turn it in a Dish, and serve it hot.

I have made this many times. Unlike a modern Yorkshire Pudding, which should puff up in the oven, this particular fired pudding collapses and is more like a thick pancake. In fact it looks like a sloppy mess when served on the plate. However, looks can be deceptive, because it is truly delicious. Again the crust of the pudding is enriched by the rich juices that have dripped from the meat.


The sharp eyed Adam Balic has been searching through the manuscript recipe collections in the National Library of Scotland and has found many handwritten directions for making even earlier 'baken' or fired puddings. He has some important things to say about this whole issue, especially about our contemporary perceptions of the 'regionality' of such dishes. His excellent posting, The Evolution of Yorkshire Pudding will give you much more historical background to the development of these dishes than I have included here. While you are on his excellent site do check out Adam's recent research findings on haggis, the only intelligent survey of its history that I have ever read.