Recently I have watched a lot on British television (and heard even more on the radio) about Twelfth Night, the so-called last day of Christmas. But according to the liturgical calendar, the ecclesiastical season of Christmas doesn't actually end until Candlemas, the 2nd of February, a celebratory period of not twelve, but forty days. So with this in mind, and the fact that it is the 8th of January today, I guess it is still not too late for me to wish you all a Merry Christmas and apologise for my lack of communication this past year. That's my excuse anyway!

One old food custom here in the English Lake District which marked out this forty-day season was to eat 'sweet pie' for Christmas morning breakfast. This Cumberland variant on the mince pie contained mutton as well as dried fruit, spices and sugar and was the first flesh meal after the vigil of Christmas Eve, originally a day of abstinence from meat. Even during my lifetime, there were local farming families who saved a small piece of the Christmas breakfast pie in the larder to be consumed forty days later on Candlemas Day. A reclusive old Georgian shepherd called Richard Nicholson, who lived on a windswept mountain called Black Combe in the parish of Whitbeck, used to kill a sheep every year to make his sweet pies. In his History of Cumberland, the antiquarian William Hutchinson (1794) gives a long account of this eccentric man and his superstitious beliefs, which includes this passage,

Wilkinson and his neighbours were so superstitious that they believed that the oxen and other animals in the byres and stalls all genuflected on Christmas Eve when the clock struck twelve!

Anyway, back to the British television programme I hinted at earlier, which featured Twelfth Day celebrations. It was a fun Christmas edition of a production called The Victorian Bakers. It, like the original three-part version screened last year, was full of interesting facts about professional bakers in the nineteenth century. But for me it held one terrible disappointment - the quality of the food that the bakers produced. If you watched the programme, please do not believe that what you saw was really anything like the food of the nineteenth century. I sometimes had to hold my hands over my eyes and frequently wanted to roll my sleeves up to show them how to do it properly. However. this was not the fault of the bakers themselves, who were all modern professionals with incredible contemporary skills. I guess the TV company wanted them to 'bring the period back to life' through discovering the difficulties and making lots of mistakes on the way. The whole thing reminded me a bit of a food history series from a number of years ago called Supersizers. I was the "historical advisor" to that series, but the producers rarely took my advice. And although the series was highly entertaining, the food cooked by modern culinary professionals was absolutely awful, with an emphasis on offal, cods head and other dishes chosen for their shock value. As is the wont of these 'living history' productions, the Victorian Bakers also featured lashings of tripe, tongue etc. to shock our modern squeamish sensibilities (yawn!). But what was missing were the incredible skills (now mainly lost) that Victorian bakers and confectioners possessed. I prefer to celebrate those.

However, I have a confession to make. The makers of the programme did ask me to teach the bakers to decorate some twelfth cakes, but the scene we eventually filmed was not used in the final cut. I was asked to make and decorate a twelfth cake to show them the skill level, but also to teach two of the bakers to decorate one themselves. We had a great day and I think they learnt quite a lot. But what made the session very special was that I let them have a go at using some of my precious confectioner's moulds to make their cake really true to period. In fact we used moulds carved by the greatest twelfth cake decorator of all, the London based Italian confectioner William Jarrin, which was I suppose a bit like letting a modern art student use Rembrandt's actual paintbrushes. As you can see, the king and queen mould above came from the celebrated confectionery shop belonging to the Gunter family, for whom Jarrin worked as an ornament maker for a few years after the battle of Waterloo, In later life, Jarrin was paid by Lord Mansfield to travel from London to Scone Palace in Scotland to decorate a special shortbread for a visit of Queen Victoria. That always seems a bit bizarre to me - an Italian confectioner going to Scotland to decorate a shortbread! For me, it is an incredible privilege to own and to be able to use moulds carved by this nineteenth century master. I wish the BBC had also appreciated this. 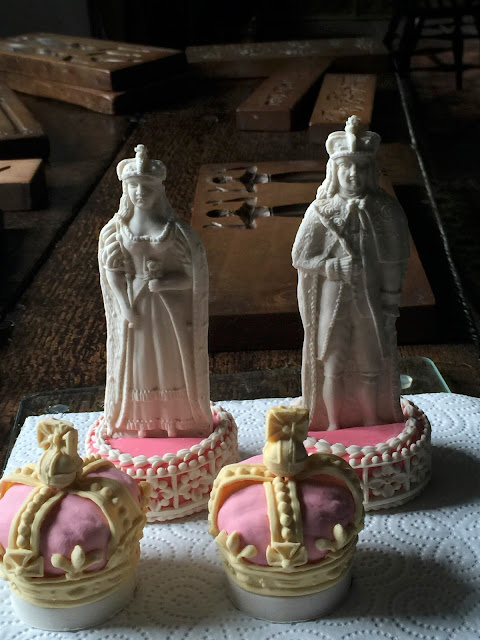 Anyway, to return to the Victorian Bakers. I was commissioned by the production company to make the cake at the top of this page with its neo-gothic gum-paste decorations, while the two bakers had a go at ornamenting the one below, using some of Jarrin's moulds. Harpreet Baura-Singh, who makes high-class contemporary cakes for a living, particularly took to the challenging task of pressing gum paste from these extraordinary moulds. Both cakes were iced with a base of pink cochineal icing as per the instructions of a number of the early authorities. The other baker, John Foster confessed that he would rather have spent his time with me making some traditional pies. Some of the other bakers did have a go at making a pie on the programme - a gargantuan Yorkshire Christmas Pie, very loosely based on a recipe in Francatelli. But the less I say about how it turned out, the better - though I suspect Mr Francatelli may be rotating rapidly in his grave. And I am not going to say too much either about the gingerbreads and moulded Christmas pudding, which would have worked much better if the bakers had been taught to use the kit properly. Anyway, this is what the twelfth cakes looked like, because sadly they did not make it to the final edit.