The Jonah Mould - Or Size Matters 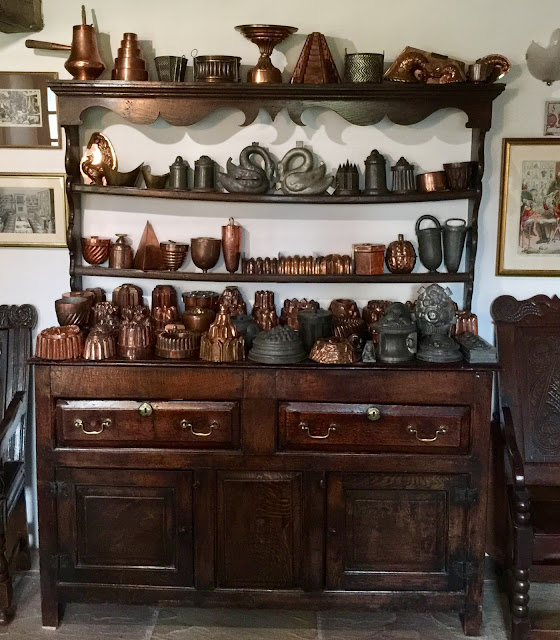 Visitors to my kitchen frequently remark on the large number of antique jelly moulds scattered around the room. I usually explain that just a few of them were actually used for turning out jellies and even some of those had other uses. For instance, on the kitchen dresser in the photo above there are moulds for making puddings, ice compotes, nougat compotes, nougat cornucopias, chocolate peacocks, raised pies, sugar baskets, cakes and ice cream bombes. There are also some jelly moulds, but they are in a minority.  "All that glitters is not gold" and all that is shiny copper is not necessarily a jelly mould.

It is actually a size thing. Nineteenth century copper moulds for jelly are rarely over five inches high. The highest they were ever made was six and a half inches and that was pushing it a bit. This is for a very simple reason. Any taller than this and the jelly will split and collapse, especially if of a light set.  Moulds higher than this were designed for making other dishes, such as cakes, boiled puddings etc. Of course it is possible to make taller jellies, but an inordinate amount of gelling agent has to be used, making them rubbery and unpleasant to eat. More stable jellies could be made in the taller moulds when fruit (or even profiteroles) were enclosed in the gel. These additions strengthened the jelly by creating what I guess could be called an edible, internal armature. Most moulds over five and a half inches were probably designed for this particular purpose.

One specialist six-inch tall mould for making a jelly with a fruit macedoine core came provided with a separate internal liner in the form of a dome. This created a cavity within a cortex of transparent jelly, which would be filled with a macedoine of fruit. A jelly made in the outer mould alone is terribly unstable. It usually splits and dramatically collapses within a few seconds. Some taller moulds were designed to hold other specialist liners, such as the taller versions of the Belgrave, Alexandria and Brunswick Star.  When set, these all had internal blancmange 'armatures' which gave them a degree of stability and helped them hold together.

Some of the taller moulds were designed with other purposes in mind - not just for jellies. For instance, some savoury dishes, like the pain de gibier in the image below, were strong enough to be de-moulded without collapsing, as they were based on a firm and quite solid purée of meat held together with isinglass. Because of their solid consistency dishes of this kind were more difficult to get out of the mould than a much more pliant jelly, but a skilled cook of the nineteenth century would have had few problems doing this.

All this goes to show that nineteenth century moulds were designed for a complex and flexible cuisine, which has been mainly forgotten. Modern chefs are not taught how to use what is now considered to be obsolete equipment. The English TV production company Wall to Wall, who specialise in living history programmes, recently featured a very large copper mould in two different programmes, with predictably disastrous results. In one of the programmes, The Victorian Bakers at Christmas, which I have already mentioned in a previous article, the mould was used to boil a plum pudding. I could tell when I watched the mould being filled with pudding mixture that this was just not going to work. Not because the mould was too large in this case, but it was not thoroughly greased and the mixture was too slack. I took some screen shots to show you what happened.

The very same mould turned up a few weeks later in Wall to Wall's BBC production Further Back in Time for Dinner presented by Giles Coren and the excellent food historian Polly Russell from the British Library. Debbie, the hard-pressed chef who made a valiant job of cooking food for the family was provided with the same totally inappropriate mould for turning out a jelly. Again in the screen shots below you can see the result - a predictable failure and not the fault of the cook. If the chef had been given a sensible-sized mould designed for jelly, I am sure she would have produced an attractive dish. But I guess these failures are perceived by the producers as making better television. I personally think it is misguided and unfair to the cook.  Perhaps we will see the 'Jonah mould' again soon - I gather Wall to Wall are making a programme on the history of confectionery - third time lucky!