How are the Mighty Fallen 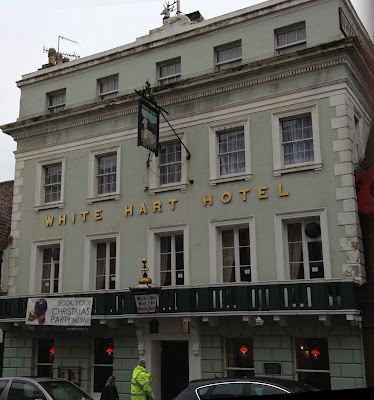 I recently had lunch in the White Hart Inn in the delightful Sussex town of Lewes. In the middle of the eighteenth century the master of this establishment was William Verral, whose lovely book A Complete System of Cookery was published in 1759. Verrall trained under the celebrated chef de cuisine Pierre de St. Clouet, who for a while cooked for Thomas Pelham Holles, the First Duke of Newcastle. Holles, who was a lover of high class French cuisine, owned the White Hart and with Verrall as cook the inn became famous for the quality of its hospitality. Sadly it is no longer a centre for fine gastronomy - in fact my lunch was so poor that I left most of it on the plate. Afterwards I checked out the hotel on Trip Advisor and discovered that I was far from being alone in my criticisms of this once celebrated inn. Here is what I found - 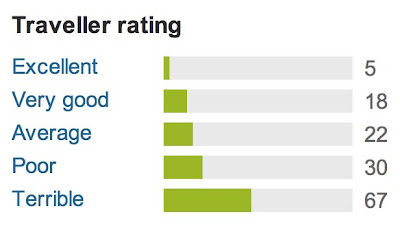 What a sad state of affairs that such an important place in our culinary history should have fallen on hard times. In fact none of the staff at the hotel to whom I spoke, had ever heard of William Verrall, despite the fact that his book has recently been reissued by Penguin under the title Recipes from the White Hart Inn! An enterprising hotel manager would have exploited this link and had copies of the book for sale at reception and perhaps a few of Verrall's dishes on offer in the restaurant.

Verrall's landlord Thomas Pelham Holles held lavish entertainments both at his London home Newcastle House and at his vast country palace at Claremont just outside Esher. Claremont was designed by Vanbrugh as his own home, but Holles bought it from the architect and commissioned him to enlarge it considerably. Nothing remains of this huge baroque palace, as Clive of India bought it and demolished it after Holles' death.  Ironically, Clive spared Vanbrugh's romantic banqueting house, the castellated Belvedere, which still survives on a mount in the gardens. It was here that the elderly Holles entertained his choice guests in the summer months with dessert foods and sweet wines. In the engraving above, the Belvedere can be seen through the window on the right.

About fifteen years ago I recreated an early eighteenth century style banquet of sweetmeats in memory of Holles at Claremont. The other day I found a photograph of the table setting, which I have posted below. 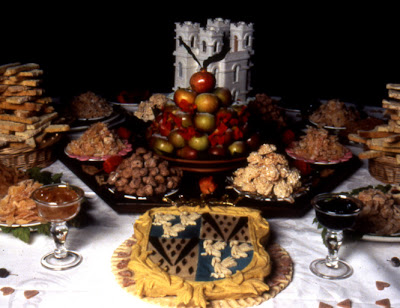 My colleague Peter Brears made the sugar paste model of the Belvedere and I made the Duke  of Newcastle's arms from almond paste and all the other dessert dishes from eighteenth century recipes. Just a week after setting this event up, I was lucky enough to buy a very nice copy of the wonderful etching below of Holles in his kitchen with his cook Clouet, who of course was also William Verrall's mentor. Aha - the wonders of synchronicity! 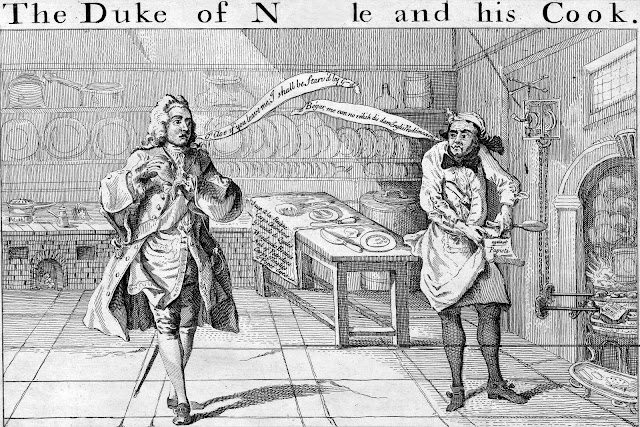