It is often said that mince pies were originally made in the shape of the infant Christ's manger. This is a great story, but can any readers of this blog enlighten me as to the actual historical sources for this claim?


I have come across only three seventeenth century references to minc'd or Christmas pies being made in an oblong shape, but they are not entirely reliable ones. John Selden (1584-1654) in Table Talk (London: 1689) tells us that "the coffin of our Christmas-Pies, in shape long, is in Imitation of the Cratch". In the seventeenth century 'cratch' was an alternative word for 'manger' This is the only reference I have ever found which states directly that these pies were made in the form of Christ's cradle. Table Talk was published posthumously and was heavily edited by Selden's friend Richard Milward, so it may not be entirely reliable.


Another reference to oblong shaped mince pies can be found in a marvellous satire on puritanism entitled The Exaltation of Christmas Pye, which was penned by a certain P.C. in 1659. He proclaims himself on the title page as a 'Dr. in Divinity and Midwifery', so I don't suppose he can be taken too seriously either. Anyway, he tells us that these pies were made in the shape of a narrow boat in order that they could easily be swallowed whole! In P.C.'s own words, 'my Advice, my Beloved, to you is, that you eat them cold. For I have heard of a Bridegroom that was killed before he could lie with his Bride, for adventuring to shovel hot minc’d Pye down his Throat for a Wager…..But Dr. Mariot, a notable Causuist in these disputes, and a Man of a sharp Stomach, is of Opinion, that a Man ought to swallow them whole. And therefore he was the first in the World that caused them to be made after the Fashion of Boats, that they might swim down the Gullet the easier: And indeed, he was a mighty enemy to four corner’d Pyes, for he said they were used to stick in his Throat.’ 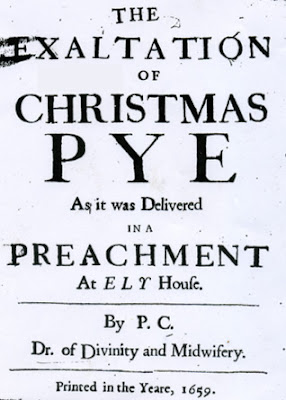 The third piece of evidence is a tiny drawing of an oblong shaped mince pie with pointed ends in the wonderful 1692 manuscript cookery book of Hannah Bisaker in the Wellcome Collection in London. However, this shape is just one of 35 others she illustrates on a page of designs for minced pies.


The truth is that mince pies were made in an incredible variety of shapes. Dozens of designs were published  between 1654 and 1751. The first shaped pie designs to appear in print were in Joseph Cooper's The Art of Cookery Refin'd and Augmented (London: 1654). Here is Cooper's recipe and woodcut.

A number of other cookery book authors, such as Robert May and Edward Kidder published similar designs, the aim always being to arrange the shaped mince pies on a plate rather like a contemporary knot or topiary garden. In the OED, Mrs Delany (1756) is cited as using a similar analogy when describing a country house garden, 'The gardens laid out in the old-fashioned way of mince-pies, arbours and sugarloaf yews." Others compared the pie arrangements to military architecture, probably having in mind the kind of forts that were designed by Marshall Vauban. The extract below is from an article written by a Mr Bavius and entitled On Christmas Pye. It appeared in The Gentleman's Magazine of December 1733. 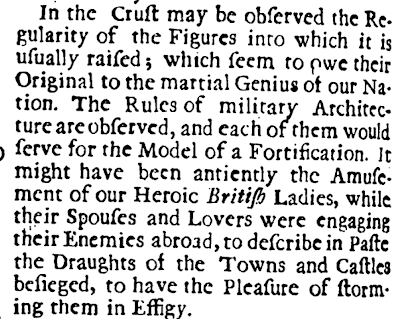 I am writing this on Christmas Eve, when according to the poet Robert Herrick it was once the tradition to sit up and guard the Christmas Pie. Whatever shape you have made your mince pies in, will you be sitting up with them tonight?

COME guard this night the Christmas-Pie,
That the thief, though ne'er so sly,
With his flesh-hooks, don't come nigh
To catch it
From him, who all alone sits there,
Having his eyes still in his ear,
And a deal of nightly fear
To watch it.