Roasting the Christmas Goose and Turkey

It is Christmas Day. I have already had more than my fair share of roast geese, plumb puddings etc. on my recent Taste of Christmas Past courses and had every intention today of preparing a simple, non-traditional lunch. But a farmer neighbour turned up on the doorstep yesterday evening with a gift in the form of a small, but fine quality bronze turkey. The bird was too good to freeze for another day. So what choice did I have, but to roast it? And in this house, all roasting takes place in front of a roaring fire, not in the oven.

Now a nice, easy way to roast a large bird like a goose or turkey is with a clockwork bottle jack in conjunction with an unusual item called a broche spit. Many of the implements that we have inherited from the cooks of the past have not come down to us with an instruction manual and the broche spit is no exception. But with a bit of common sense and a little knowledge gained from experience, it does not take much of an effort to figure out that this device was designed for suspending large birds under a bottle jack. There is a line drawing of such an arrangement in Seymour Lindsay's classic Iron and Brass Implements of the English Home (London: 1927), which I have reproduced below. 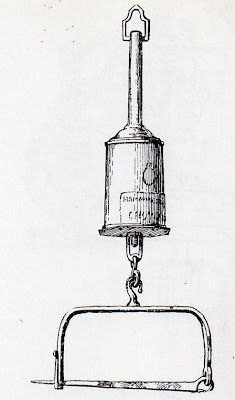 I am fortunate enough to own a broche spit very similar to the one above, so it was with this that I decided to roast my Christmas Eve gift.

After stuffing the turkey, I trussed it and stringed it as in the images below. A large flat skewer was pushed through the pinions, (the terminal section of the turkey's wings). Then the skewer on the broche spit is inserted between the bones of both legs, at the same time pushing it through the abdomen. 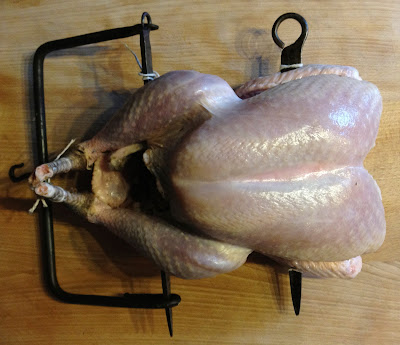 The photo below shows a goose which was roasted on one of my courses - trussed, strung and ready for putting down to the fire. A turkey is prepared in exactly the same way. The string will hold the bird on the broche spit even when the flesh softens and there is a likelihood of it falling off the skewers.

Both goose and turkey cook rapidly in front of a good fire. Believe it or not, this one took just over an hour, much quicker than oven roasting. My favourite recipes for roasting turkey are from the anonymous The Whole Duty of a Woman (London: 1737). This marvellous manual of eighteenth century culinary art offers a variety of methods for roasting turkeys and turkey poults (juvenile turkeys), including instructions for cooking them with mangoes, shallots, cardoons, stuffed with either oyster or crawfish and for roasting them the Polish way with a saffron flavoured cullis. There is even one for roasting them with a farce of chestnuts and small sausages, the origin of the most popular stuffing recipe used today. Those people who say that eighteenth century English cookery was dull compared to French have no idea what they are talking about.

This Christmas the British supermarket chain Waitrose have been marketing a rather expensive stuffing designed by the popular television cook Delia Smith under the brand name of Delia's Eighteenth Century Chestnut Stuffing. She has adapted it from a recipe in Hannah Glasse's The Art of Cookery made Plain and Easy. (London; 1747), although Hannah is not credited on the package. Delia's ready-made stuffing retails at £9.99 - and you have to add an onion, which will bring it over the £10 mark. I made mine from the original Glasse recipe for £2.50, using fresh parsley, onion and herbs from my garden. I have reproduced Hannah's recipe, which was originally for fowl (chicken) at the end of this posting. By the way, one of Hannah's main sources for recipes was The Whole Duty of a Woman.