In my last posting I lamented the decline of the standard of food at the White Hart Inn (now Hotel) in Lewes. So I thought it would be fun to make a dish for you from the 1759 cookery book written by William Verral, the master of the inn at the apogée of its gastronomic fame. I have chosen an unusual, but easily made fritter. Here is Verral's original recipe. He almost certainly learnt it from Clouet, the Duke of Newcastle's cook. It is hardly a great set piece baroque dish, just a simple fritter made in rather an eccentric way, but Newcastle loved Clouet''s tasty little treats like this.


Fritters of all kinds were popular in the Georgian period and there were many unusual varieties on offer. I have already introduced you to skirret fritters. Here is a clever way of deep frying currant jelly in batter to produce an incredibly rich and buttery parcel of crisp batter with a soft fruit centre. Most fritters were fried in hog's lard at this period, but clarified butter (oiled butter) is used here to give these little devils their decadent buttery character.


Modern wafer paper (rice paper) is too thin to withstand the heat of the boiling butter and will split open and release its jammy contents, but if you use a double layer of rice paper, the recipe works very well. Wet the edges lightly and pinch them close together to make a good seal. Dip them in an eggless beer batter and drop them into the hot butter immediately. They need a turn, which must be done carefully with a perforated spoon. Then drain on some paper. Sprinkle with powdered sugar and eat them while still hot. As you savour their delicious texture and flavour, you will also feel the indescribable sensation of your arteries rapidly furring up! Enjoy!

Wafer paper must have been made commercially at this period. It crops up from time to time as an ingredient. However, after  a lifetime of searching I have only found one recipe, which I have posted below. The more adventurous of you may like to experiment with it.

Verral, in his recipe for currant fritters en surprize, refers to a previous recipe, so I have reproduced it below. If you do not have any wafer paper, you might like to try this one instead. If you have ever prepared hand-made ravioli, you will be familiar with the technique. It works very well when made with very thinly rolled puff pastry. 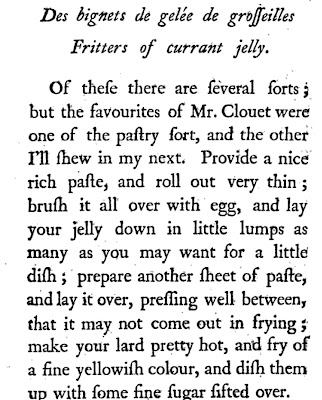